Grow Text SizeShrink Text Size
Meet the Faces Behind the MIRI - Part 1: Wright, Goodson, Glasse and Ressler
This is a limited series of features to introduce some of the many scientists and engineers involved in the MIRI instrument that will fly aboard the James Webb Space Telescope. It is not meant to be all inclusive, but to highlight some of the amazing talent and organizations involved in the MIRI. 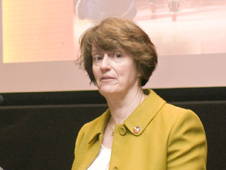 How many professors would ever dream of playing a role in building an instrument that will be sent over a million miles into space and leading a team of European institutes contributing? Well, Gillian Wright does both of those things.

Wright is the European principle investigator for the MIRI. She leads the European consortium of institutes that have developed the MIRI instrument in a partnership with NASA's JPL. She is also a professor and research astronomer, who specializes in infrared observatories and astronomical instrumentation, as well as studies of star formation and dust in interacting galaxies.

Wright serves as the Director of the U.K. Astronomy Technology Centre in Edinburgh, Scotland, and a member of the Webb Science Working Group. She's one of several astronomers who are co-investigators for the Spectral and Photometric Imaging Receiver (SPIRE) instrument on ESA's Herschel mission, which is currently the largest observatory in space. Earlier in her career, she worked at the United Kingdom Infrared Telescope on Mauna Kea in Hawaii, where she became head of instrumentation. In 2006, Queen Elizabeth II made Wright a member of the Most Excellent Order of the British Empire for services to science. 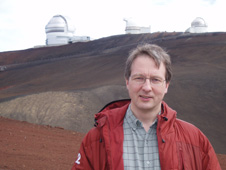 Staring into space may be considered a bad thing; but, when you've been looking at the cosmos for more than 30 years while building infrared instrumentation, you build up a pretty stellar reputation. Alistair Glasse's love of astronomy has been evident on the projects he's been involved with throughout the years.

Glasse is the Mid-Infrared Instrument (MIRI) instrument scientist. He's worked as a project scientist for the Michelle instrument at the United Kingdom Infrared Telescope on Mauna Kea, Hawaii, and as a research assistant on the Infrared Space Observatory team at ESA/European Space Research and Technology Center (ESTEC) in Noordwijk, Netherlands.

He spent some time flying instruments on helium balloons in Texas and New Mexico in the 1980s. He spent two years at ESA/ESTEC in the Netherlands in 1987-1989. He moved to the Royal Observatory, Edinburgh, in 1989 to work for the James Clerk Maxwell Telescope. He was appointed project scientist for the Michelle mid-infrared instrument (a ground-based precursor of Webb/MIRI) in 1992. 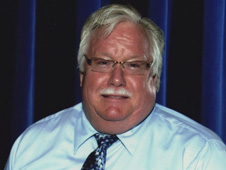 Imagine how involved the process for putting this truly unique instrument together was and managing fitting everything together. This was no small task and Greg Goodson managed to contribute to this process.

Goodson is the MIRI systems manager at JPL. He has worked for Caltech/JPL for 35 yrs. He has been the JPL project systems engineer for MIRI for the past eight years and has been very involved with making sure the pieces come together and function.

Greg was the integration engineer and assistant project manager for the NASA EOS Aqua/Atmospheric Infrared Sounder (AIRS) instrument. Prior to that, he was the verification engineer, lead operator and eventually the manager for the Atmospheric Trace Molecule Spectrometer (ATMOS) instrument, which flew four times on the space shuttle SpaceLab missions from 1985 to 1995. He was also the JPL project manager for the first KidSat mission in which JPL supported the University of California, San Diego, and the Johns Hopkins University, Baltimore, Md., with a student-controlled digital camera mission aboard a space shuttle.

After MIRI starts producing images the astronomical community will want to use those images for their studies of the cosmos. Ensuring this can happen is critical to its success. Enter JPL's Mike Ressler. 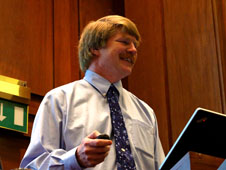 Mike Ressler's primary job is to verify what can happen with the MIRI especially with regard to the detector and cooler subsystems that are JPL's responsibility.

Ressler is the NASA project scientist for the MIRI. He is based at JPL. Ressler's scientific interests focus on the early stages of star formation, but he has also been involved in a broad range of topics from asteroid studies to infrared-bright galaxies.

Ressler has been involved in building infrared astronomical instruments for almost 30 years. He has worked on ground-based instruments used on the Keck Telescopes and the three-meter NASA Infrared Telescope Facility, both atop Mauna Kea in Hawaii, and the Palomar 200-inch telescope near San Diego, Calif. He is also a member of the science team for NASA's Wide-field Infrared Survey Explorer (WISE) all-sky survey, where he had the distinction of having published the first scientific paper based on WISE results. His duties included evaluating the overall reliability of the 563 million sources in the All-Sky Source Catalog as well as studying the impact of the South Atlantic Anomaly (a region near South America where radiation levels above the atmosphere are especially high) on the WISE detectors and the corresponding survey strategy.