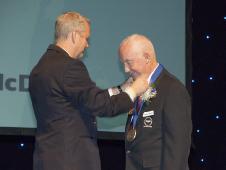 Retired NASA Apollo program astronaut James McDivitt (right) is presented with a medal by Ron Smith, vice-mayor of the City of Lancaster, Calif., at the city’s Aerospace Walk of Honor induction ceremonies Sept. 19. Credit: NASA/Tom Tschida Retired NASA Apollo program astronaut James McDivitt was inducted into the Aerospace Walk of Honor in Lancaster City, Calif. on Sept. 19, 2009. McDivitt, who commanded the Gemini IV mission in 1965 and the Apollo 9 mission in 1969, was one of five former test pilots and astronauts honored at the 20th induction ceremonies.

"It's a great honor to be here. That list of 100 people that were presented...to you just before we all arrived on the stage is really something, and I'm proud to be part of it. I have many personal friends in that list, and I'm proud to be with them," said McDivitt talking about his induction to the Aerospace Walk of Honor.

Apollo 17 commander Gene Cernan was keynote speaker during the ceremony. Cernan said he believes that "if I could have every human being on this planet of ours, and stand them right next to me for five minutes on the surface of the moon, looking back home, the world would be a different place today." McDivitt agreed with Cernan that towards the end of the Apollo program, he "thought that the American people could do anything, anything, I mean ANYTHING, given enough time and money."

Following the ceremony, McDivitt and Cernan were joined by Lancaster City vice-mayor Ron Smith, NASA Dryden acting deputy director Gwen Young and retired NASA astronaut Gordon Fullerton to plant a commenmorative moon tree in front of the Lancaster Performing Arts Center. The sycamore sapling is a second-generation descendant of sycamore trees that were germinated from seeds that were flown on the Apollo 14 moon mission in 1971. This moon tree joins dozens of other trees now growing at state capitols, university campuses, and other select locations across the nation. 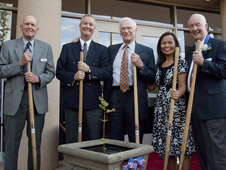 Retired NASA astronaut Gordon Fullerton, Vice-Mayor of Lancaster City, Calif. Ron Smith, Apollo 17 commander Gene Cernan and NASA Dryden acting deputy director Gwen Young join James McDivitt (right) in wielding shovels at the planting of a commemorative moon tree after the induction ceremony. Credit: NASA/Tom Tschida McDivitt commanded the first American space walk mission during Gemini IV, and later during Apollo 9, he oversaw the first tests of the Lunar Module in orbit around Earth. Joining the Air Force in 1959, he started as a student test pilot. McDivitt quickly climbed through various positions and programs before being selected as an astronaut in 1962.

Reflecting on his career, McDivitt spoke about his own successes and challenges. "I flew a couple of space flights. They're a lot of fun, real challenging. Later on, I managed the Apollo spacecraft program for Apollo missions 12 through 16. The first one I was in charge of was struck by lightning twice right after it lifted off, the next one was Apollo 13...so, you know, I was really a great program manager!"

A graduate of the US Air Force Experimental Test Pilot School and member of the Society of Experimental Test Pilots, he has been honored with many awards highlighting his accomplishments, including two NASA Distinguished Service Medals, four Distinguished Flying Crosses, five Air Medals, the NASA Exceptional Service Medal, two Air Force Distinguished Service Medals, induction into the U.S. Astronaut Hall of Fame and the International Space Hall of Fame. McDivitt and the other four 2009 inductees now join the other honorees in the Aerospace Walk of Honor.

Established in 1990 by the Lancaster City Council, the Aerospace Walk of Honor runs along Lancaster Boulevard through the city where each inductee is memorialized with a granite pillar that recognizes the important contributions of each individual who 'soared above the rest.'