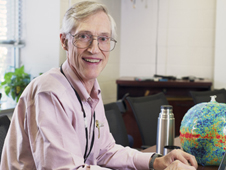 John Mather prepares for his tweet chat. Credit: NASA/Chris Gunn
› Larger image Nobel Laureate John Mather responded to questions on Twitter during a tweet-chat on Tuesday, September 25, 2012. For one hour, Mather personally answered tweeted questions about NASA's James Webb Space Telescope and its science during the NASA hosted the tweet-chat.

Mather was tweeting at NASA's Goddard Space Flight Center in Greenbelt, Md. During the event, Mather answered 30 questions, explaining what the Webb telescope will see and what scientists hope to learn. Followers discovered that Webb "can see the heat signature of a bumblebee at the distance of the moon." Mather sent out further links for discussions that could not be answered in 140 characters.

The chat included audience members tweeting in with #JWSTscience. Mather says it was a great opportunity to promote science in general and the Webb telescope.

"The Webb telescope offers the opportunity for many discoveries and has the chance to surprise everyone," says Mather.

Mather's engineering presentation will occur at 1:00 p.m. EDT today. The talk will be broadcast on www.nasa.gov/ntv.

The Webb telescope is the world's next-generation space observatory and successor to the Hubble Space Telescope. The most powerful space telescope ever built, the Webb telescope will provide images of the first galaxies ever formed, and explore planets around distant stars. It is a joint project of NASA, the European Space Agency and the Canadian Space Agency.