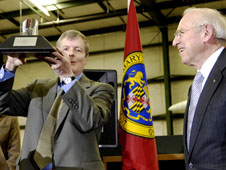 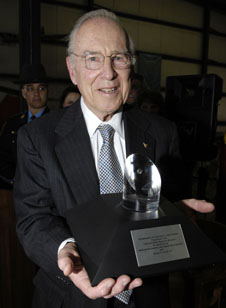 Lovell holds the Ambassador of Exploration Award. Image Credit: NASA/Paul Alers. Click image to enlarge. Jim Lovell launched into history as part of the Gemini 7 mission. The flight was the first rendezvous of two manned maneuverable spacecraft. Today, Friday, April 3, 2009, NASA honored him for his contributions to the U.S. space program. Lovell accepted the Ambassador of Exploration Award at thePatuxent River Naval Air Museum in Lexington Park, Md. The award will be displayed at the museum, which is near the Naval Air Test Center where Lovell was a test pilot.

As Apollo 8's command module pilot, Lovell was part of humanity's first journey to the moon. He also became the first person to journey to the moon twice as commander of Apollo 13 in 1970. Lovell commanded the 1966 Gemini 12 mission, which developed procedures for human travel to the moon, with Buzz Aldrin acting as the mission's pilot.

NASA is giving the Ambassador of Exploration to the first generation of explorers in the Mercury, Gemini and Apollo space programs for realizing America's goal of going to the moon. The award is a moon rock encased in Lucite, mounted for public display. The rock is part of the 842 pounds of lunar samples collected during six Apollo expeditions from 1969 to 1972.