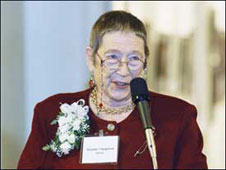 Until her recent retirement, Simpson was Chief Scientist Emeritus for Meteorology, Earth Sun Exploration Division, at NASA's Goddard Space Flight Center in Greenbelt, Md. She worked with a science group on Cloud and Mesoscale modeling and studied hurricanes. She has authored or co-authored over 190 scientific articles.

Dorothy Zukor, Deputy Director of Earth Sciences at Goddard, said "Joanne was a joy to work with. In addition to being excited and enthusiastic about her own research, she was always helping students to become scientists. Many are practicing in the field today because of her guidance and encouragement. She has left a true legacy, not only from her own work but for the future of the field."

Joanne was born in 1923, and was a pioneer by the time she was in her twenties. As a student pilot during World War II, she studied meteorology. Joanne then spent the rest of the war teaching meteorology to Aviation Cadets. She earned a B.S. in Meteorology from the University of Chicago under Carl-Gustaf Rossby. Rossby was a Swedish-U.S. meteorologist who first explained the large-scale motions of the atmosphere in terms of fluid mechanics. In 1949, Simpson became the first woman to earn a Ph.D. in meteorology, focused her research on clouds, and went on to serve on the faculty of the University of Chicago. 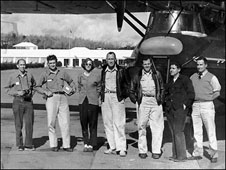 > View slightly larger image
The Navy provided a PBY flying boat to the Woods Hole Oceanographic Institute so Joanne Simpson could study tropical clouds. In this photograph she stands with her crew in front of the aircraft. Credit: Joanne Simpson and the Schlesinger Library Simpson really made her mark in meteorology in the late 1950s, when she and her former professor, Herbert Riehl came up with an explanation of how the atmosphere moved heat and moisture away from the tropics to higher latitudes. That explanation included the "hot tower" hypothesis that later shed light on hurricane behavior.

A "hot tower" is a tropical cumulonimbus cloud that penetrates the tropopause. Basically, the cloud top breaches the top of the troposphere, the lowest layer of the atmosphere and reaches into the stratosphere. These clouds are called "hot" because they rise high due to the large amount of latent heat released as water vapor condenses into liquid.

Joanne came to NASA Goddard in 1979 as the Chief of the Severe Storms Branch of NASA’s Laboratory for Atmosphere. Her arrival at NASA followed an academic career that included the University of Chicago, Woods Hole Oceanographic Institution in Woods Hole, Mass., and the National Oceanic and Atmospheric Administration (NOAA), where she was the head of NOAA's Experimental Meteorology Laboratory in Miami, Fla., for a long period. She also taught as a professor at the University of California at Los Angeles and the University of Virginia, Charlottesville, Va., before coming to NASA. 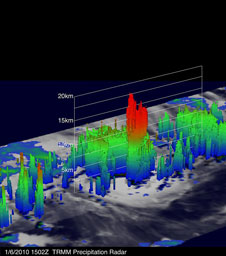 Between 1986 and the launch in November 1997, Joanne served first as Study Scientist and then Project Scientist for TRMM, bringing it from concept to reality. TRMM continues to fly today and provide unique surface rainfall and hydrometeor profile data for climate and atmospheric process studies and for real-time operational applications related to convective systems and hurricanes. Joanne often stated that TRMM was the most important accomplishment of her career.

Joanne recently inquired about TRMM and was very enthusiastic about TRMM's potential overlap with Goddard's Global Precipitation Measurement (GPM) mission, to be launched in 2013. Dr. Robert Adler, now a Senior Research Scientist at the University of Maryland, College Park, was formerly Joanne’s Deputy on TRMM and also TRMM Project Scientist later in the mission, says "Joanne was the heart and soul of TRMM during the pre-launch phase, sharpening the scientific focus of the mission, resolving critical choices related to instruments, orbit, etc. and fighting (and winning) the budget and political battles to get us to launch and beyond. TRMM would not exist if it hadn’t been for Joanne."

Joanne had a career filled with awards and recognition of her research. She was elected to the National Academy of Engineering, awarded the Carl-Gustaf Rossby Award (the highest honor bestowed by the American Meteorological Society), presented with a Guggenheim Fellowship, served as President of the American Meteorological Society and received numerous NASA and Goddard awards. In 2002, she was awarded the prestigious International Meteorological Organization Prize. She was the first woman to receive the award.

Joanne's contributions will forever live on in NASA hurricane research and are a tremendous part of meteorological history.

> In-depth article about Dr. Simpson's career
› Back To Top