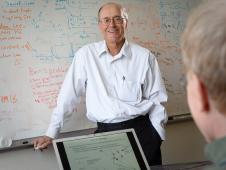 Forty-five years ago, 27-year old Heinz Erzberger arrived at NASA Ames Research Center, Moffett Field, Calif. armed with a new doctorate in mathematics and engineering. In 1973 Erzberger began the work that revolutionized air traffic management by using a new approach for the decisions made by air traffic controllers, using math and physics as part of the analysis.

Erzberger's research focused on using mathematics and physics to create a set of algorithms, which have been used for more than 14 years and are still being used today by the FAA to control air traffic. The significance of his work was recognized by the National Academy of Engineering when Erzberger was recently elected as a new member.

"It's a wonderful honor to be a member of this prestigious group. I'm very humbled by it all," said Erzberger.

Focusing on aircraft safety, fuel efficiency, and on-time arrivals, Erzberger began automating the nation’s air traffic control system. "I took all of the data and formulated it into compact analytical logic. There were many wonderful Eureka moments. As things fall into place, a lot of times it’s surprising to find the answer turns out to be so simple," said Erzberger.

As is everything with aeronautics, safety is of utmost importance. "The safety of the passengers is always the most important,” said Erzberger but he also understood the importance of being environmentally responsible decades before it became fashionable to be so. "I made sure not to waste anything – that the planes weren't flying around waiting."

Over the years, Erzberger’s enthusiasm for his work has never weakened. "You don’t get something done if you don't have a passionate interest in it," Erzberger commented.

Much of the air traffic management research currently being done is a spinoff of Erzberger's work. "It was really the tip of the iceberg for what is potentially possible. The outgrowth of this work resulted in many new innovations," said Erzberger.

Erzberger's current research focuses on algorithms for the Next Generation air traffic management system. NextGen, as it is called, will use software to detect and resolve conflicts between aircraft. "It is the most challenging of all the problems we have tackled so far," said Erzberger.

However, it isn't all about the work. Sitting in his office, Erzberger motions towards the open door.

"There are so many people up and down those hallways who are working on projects I can relate to," Erzberger observed. "What really makes it a pleasure is to be able to mentor younger colleagues who are at the beginning of their research careers. That really is the most satisfying part of my life." Erzberger lives in Los Altos Hills, Calif.