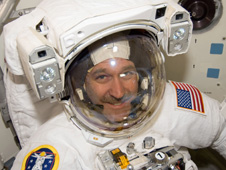 › View Photo Gallery NASA astronaut John Grunsfeld, who participated in three spaceflights to service the Hubble Space Telescope, is leaving the agency to become the deputy director of the Space Telescope Science Institute in Baltimore. The institute is the science operations center for Hubble and the James Webb Space Telescope, which is planned for launch in 2014.

"During the past 18 years, John has been a true asset to the agency," said NASA Administrator Charles Bolden, a former astronaut who few on the STS-31 mission that deployed the Hubble. "Some have called him the chief Hubble repairman, but I call him a friend and wish him the best in his new endeavor."

During 2003 and 2004, he was NASA's Chief Scientist at the agency's headquarters in Washington. He helped develop the Vision for Space Exploration, which set NASA on the path for future exploration endeavors.

In accepting the institute position, Grunsfeld said, "This is an incredibly exciting opportunity for me to work at a focal point of top astronomers at the leading edge of scientific inquiry. The team at the Space Telescope Science Institute has a demonstrated record of meeting the high performance challenges of operating the Hubble Space Telescope and preparing for the James Webb Space Telescope. I look forward to working with this excellent team as we continue to explore the mysteries of the universe."