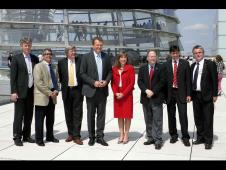 NASA Deputy Administrator Lori Garver poses with members of the German Bundestag and NASA representatives at the Reichstag in Berlin. Credit: NASA

› View Image Gallery NASA Deputy Administrator Lori Garver returned June 15 from a week-long, three-city trip to Europe that included addressing the United Nations Committee on the Peaceful Uses of Outer Space and signing a cooperative agreement to extend the mission of an Earth science satellite.

Garver’s visit also included discussions with key European space agency heads and senior-level officials in the German and French governments. The focus of her travel was to explain the administration’s new plans for space exploration and make clear that expanded international collaboration will be a cornerstone of NASA’s future activities.

In Germany, Garver visited the Reichstag in Berlin to meet with key members of the Air and Space Group of the Bundestag, which is the parliament of the Federal Republic of Germany. Garver also had an opportunity to review NASA’s ongoing and planned cooperation with Germany with the U.S. ambassador there, Phillip Murphy.

At the Berlin Air Show, Garver and German Aerospace Center (DLR) Executive Board Chairman Johann-Dietrich Wörner signed an agreement June 10 to extend the Gravity Recovery and Climate Change (GRACE) mission through the end of its on-orbit life, which is expected in 2015.

GRACE tracks changes in Earth’s gravity field by noting small variations in gravitational pull from local changes in Earth’s mass. Data from the GRACE mission have been used for such diverse purposes as measuring the amount of water lost in recent years from the aquifers for California's primary agricultural region and recording losses from Greenland's ice sheet.

NASA and DLR signed the original agreement in 1998. The two agencies jointly developed the GRACE mission and have cooperated on operations since the spacecraft’s launch in March 2002.

In Paris, Garver met with several representatives from the French president’s office who had an interest in science and technology activities. She also had meetings with the director general of the European Space Agency and president of the French space agency to discuss NASA’s future plans and opportunities for potential future cooperation.

After the meetings in Berlin and Paris, Garver traveled to Vienna, Austria, where she addressed the 53rd session of the United Nations’ Committee on the Peaceful Uses of Outer Space on June 14. She explained NASA’s new plans to the gathering of international representatives.

“President Obama has laid out a bold new path for NASA to become an engine of innovation, with ambitious new programs that I believe will inspire people from around the world,” Garver said. “Under the president’s direction, the United States will pursue a more meaningful and sustainable approach to human space exploration through the development of transformative technologies and systems.”

“NASA’s level of international cooperation is increasing each year,” said Al Condes, deputy associate administrator of NASA’s Office of International and Interagency Relations, who accompanied Garver on the trip. “The deputy administrator’s travel to Europe provided an excellent opportunity to meet with our key partners to discuss NASA’s future plans and reaffirm our strong commitment to working collaboratively on a wide variety of programs.”

For more information on NASA’s Office of International and Interagency Relations visit: http://oiir.hq.nasa.gov/index.html.

News media representatives seeking additional information on the trip should contact Michael Cabbage in NASA’s Office of Communication at mcabbage@nasa.gov or 202-358-1600.