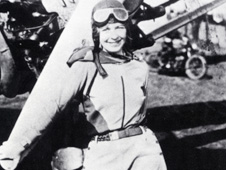 Elinor Smith in Long Island with an early Bellanca plane that she used to beat the solo flight record.

Her final cockpit time was spent in April, 2001, when, at 89, she flew a four-passenger plane while visiting NASA's Langley Research Center.

In between, Smith, who died on March 19 at age 98, set records and blazed a trail for women in flight and for aviation in general.

In 1930, Elinor Smith was voted, "best female pilot" by her peers, a group that included Amelia Earhart. Smith's aviation records for endurance, altitude and speed in the 1920s and 30s led to worldwide fame.

"I remember so vividly my first time aloft that I can still hear the wind sing in the wires as we glided down," she wrote in her autobiography, "Aviatrix" (Harcourt Brace Jovanovich, 1981). "By the time the pilot touched the wheels gently to earth, I knew my future in airplanes and flying was as inevitable as the freckles on my nose."

She continuously inspired others to reach for the stars.

She visited Langley in 2001 as a guest of the center's General Aviation Programs Office. While there, she flew a highly modified four-passenger aircraft fitted with the latest in smart aircraft technology that evolved from the NASA-led Advanced General Aviation Transportation Experiments (AGATE) program.

She also signed autographs and delivered a lecture entitled, "Flying: Past, Present and Future," a one-hour talk about her flying experiences and her vision for the future of aviation. 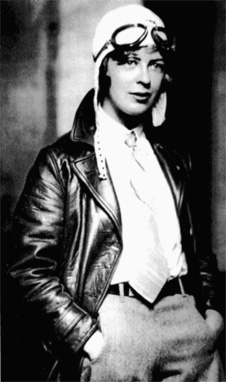 Her lecture took place at the Pearl Young Theatre, which was named for the first female professional at Langley -- Pearl I. Young.

"Elinor wowed us all with her energy and joy of life at age 89," said Liz Ward who hosted Smith's visit as the education and outreach lead for Langley's General Aviation Programs. "It's been almost 10 years since she was here, but those who met her would remember. I keep her picture on my office bookshelf to remind me of her example of living life to the fullest."

Smith's visit made a lasting impression on Hank Jarrett, then, manager of the AGATE program. He recalls her eagerness at lunch to get to the Hanger. "She really wanted to get in the planes and see what we were doing with them," he said.

"She was a beautiful, vital woman and I would never have believed she was 89," said Jarrett. "She deserves to be remembered for all the contributions she made to aeronautics and as a wonderful human being."

Jarrett sent Smith a copy of her book, and she returned it to him with a note in the flyleaf. "I keep the book, her picture and a couple of other special books in the shelf next to my desk," Jarrett said. "I will really miss her, but she is in good company."

Her eventful arrival to Langley was followed by an eventful exit when the vehicle in which she was riding in was hit broadside just outside of the gates of Langley. "I honestly think it is one of the reasons we finally got a new intersection and a light out there," said Jarrett.

"Maybe we should dedicate the gate intersection as the Elinor Smith light," he proposed. For the record, Smith wasn't behind the wheel and wasn't injured.

Some of her early accomplishments went overlooked because Smith's family had deliberately kept her out of the limelight to keep her focused on flying. It wasn't until 1928 when her family would welcome publicity. 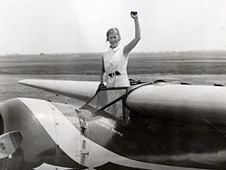 Elinor Smith in Oct. 1928. Smith is the first -- and only -- pilot to fly under all four New York East River bridges. Credit: cradleofaviation.org

On a dare that year, she flew a Waco 10 under all four of New York City's East River bridges; according to the Cradle of Aviation Museum, she is the only person ever to do so.

Bellanca and Fairchild Aircraft companies hired her as their first woman test pilot.

An unexpected first for Smith was in 1934, when she became the first woman to appear on a Wheaties cereal box.

Only a few years after her aviation fame had set in, she gave it all up to marry New York lawyer and politician Patrick Sullivan and to concentrate on raising their four children. It was not until the 1960s that Smith returned to flying.

In 2000, she was still breaking records at NASA's Ames Research Center with an all-woman crew. She took on NASA's Space Shuttle vertical motion simulator, and became the oldest pilot to succeed in a simulated shuttle landing.

Other known firsts include her first plane ride at the age 6. At 10, she took her first flying lessons. At 15, she soloed for the first time. Three months later, she set her first of many records at 11,889 feet in a Waco 9.

"She is a part of history now and will be that beautiful, excited, young 15-year-old forever," said Jarrett. "That is a history we can each hope for."