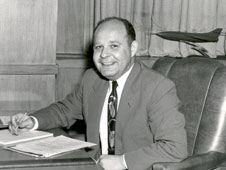 Paul G. Dembling helped write the agency's charter, the National Aeronautics and Space Act of 1958. Credit: NASA
› View Full Size Paul G. Dembling, co-author of the legislation that founded NASA, died on Monday, May 16, in Florida. He was 91 years old.

"A lot of the policy aspects of it were done quickly," Dembling said. "But the functions and the authorities that were embodied in that piece of legislation were well thought out and very well considered."

Dembling was born in Rahway, N.J., on Jan. 11, 1920. He earned a bachelor's degree in economics in 1940 and a master's degree in 1942 from Rutgers University. He earned a J.D. from George Washington University Law School, where he served as an editor of the law review.

"Of all the jobs I have had and things I have done, I am most pleased with the creation of the legislation for NASA," Dembling said in a 2002 interview.