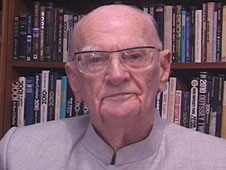 "With the passing of Arthur C. Clarke we in the space community have lost yet another legendary pioneer of early spaceflight," said NASA Administrator Mike Griffin. "He was among the earliest of those who developed and promoted serious space mission concepts, both for human exploration of the solar system and for utilization of near-Earth space for immediate human benefit."

Griffin added Clarke "could envision a likely and plausible human future beyond the Earth, a future with important human activity on the moon, Mars, other planets, and eventually beyond the solar system."
Read Griffin's Full Statement

In September of 2007, Clarke sent a special video message to NASA's Jet Propulsion Laboratory during the Cassini spacecraft's flyby of Saturn's moon Iapetus. In the video, Clarke notes that the flyby was of particular interest to fans of 2001: A Space Odyssey, since Iapetus was his original setting for the famous monolith, which turns out to be a gateway to the stars.

"I want to thank everyone associated with this mission and the overall project," Clarke said in the video. "Science projects are tremendously important for our understanding of the solar system. And who knows, one day our survival on Earth might depend on what we discover out there."

"... an unparalleled visionary of the future, inspiring countless young people ..."

--
NASA Associate Administrator for the Science Mission Directorate Alan Stern on Arthur C. Clarke Clarke is famous for saying that "any sufficiently advanced technology is indistinguishable from magic," yet some of his futuristic writings have since become reality. He wrote an article in 1945 proposing a series of geostationary communications satellites. NASA launched its first communications satellite, Echo, in 1960, and today the geostationary orbit is known also as the Clarke orbit. In 1954, Clarke wrote of a design for a lunar base featuring igloo-shaped habitats, not unlike the potential habitats NASA is now testing for it's lunar outpost, planned to be in place by 2020.

NASA also honored Clarke's most famous work in 2000, when it christened its newest Mars orbiter the "2001 Mars Odyssey." Alan Stern, NASA associate administrator for the Science Mission Directorate, says Clarke's "vision lives on in his writing."

"Arthur Clarke was a gifted writer of science and science fiction," said Stern, "and an unparalleled visionary of the future, inspiring countless young people throughout the middle and later 20th century with his hopeful vision of how spaceflight would transform societies, economies, and humankind itself."