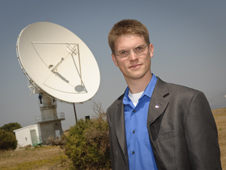 Chris Kemp
Photo Credit: NASA Ames Research Center
›  Link to larger photo
Chris C. Kemp, NASA’s chief technology officer for Information Technology and ‘super star’ of IT innovation for the agency, has been recognized with CIO Magazine’s “CIO 100” award for his work done while he was chief information officer for NASA’s Ames Research Center in Moffett Field, Calif., in 2009. Every year, CIO Magazine identifies and honors 100 organizations that have distinguished themselves through the effective and innovative use of information technology.

“I am honored to be recognized by CIO Magazine and to be the first honoree from Ames is truly humbling. The work that I did there in 2009 was meaningful to me and makes me extremely proud. I am inspired by NASA’s mission, and it’s been an honor to be a member of the team ” said Kemp.

The combination of Kemps’ enthusiasm for NASA and information technology has made him extremely successful at his job.

"This year's CIO 100 awards draws well-deserved attention to companies that are not only innovating with IT but creating genuine business value as well," said Maryfran Johnson, editor in chief of CIO Magazine. "These winning companies and their IT organizations are an inspiration to businesses everywhere."

Kemp is not afraid to venture into unchartered territory. In 2008, he began the Nebula Cloud Computing project (now a NASA-wide program) which uses open source software components to create a robust cloud environment where scientists can process and share data. Kemp also implemented an agency-wide IT Security Operations Center at Ames.

“The Nebula Platform allows scientists to focus on their research and spend less time and money on IT infrastructure. These researchers are doing amazing things, and it’s rewarding to create a platform that enables this innovation,” said Kemp.

Kemp is NASA’s first chief technology officer for IT, a new position established to lead IT innovation across the agency. "This move will leverage Chris’ creative talents and energies," said NASA Chief Information Officer Linda Cureton.

“I’m extremely excited about my new position. I’m thrilled to be involved in supporting many of the ground-breaking IT innovations happening here” Kemp said.