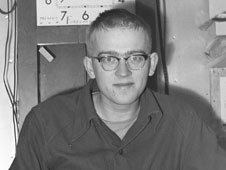 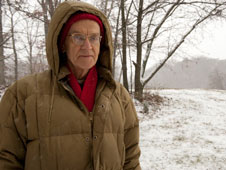 › View larger
Bob is bundled up for the cold at Goddard. Credit: NASA/Debora Mccallum 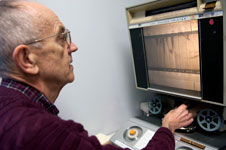 › View larger
Much of Benson’s ionospheric data is on 35 millimeter film and is still viewed on a microfilm reader. Credit: NASA/Debora Mccallum As the weather gets colder in Maryland, Bob Benson tells tales of winters he used to know in Minnesota, the South Pole, and Alaska. A five-decade career studying Earth's ionosphere – the part of Earth's atmosphere that reflects radio communication waves – has taken him to some extreme latitudes.

Standing in the corner of Bob Benson's office is a microfilm reader. You know, the big, boxy machine that was used to look up archived newspaper articles before such things were an Internet search away. That machine is one of the tools Benson has used to scan decades worth of data throughout his 46 years at NASA’s Goddard Space Flight Center in Greenbelt, Md. He studies the ionosphere – the swath of our atmosphere filled with electrons and ions stretching from about 30 to 600 miles above Earth's surface – and the data he studied from various ionospheric satellites were displayed on 35-millimeter film.

"We had thousands of these boxes," he says, holding up a small cardboard box in which a film lies curled. "When I first came here, we'd go pull them from a drawer at the National Space Science Data Center at Goddard and do analysis with a machine like this."

With such a long tenure at Goddard, Benson is a one-person historical record of ionospheric studies at NASA and even beyond. Benson’s research has taken him from pioneering Antarctic campaigns with supplies air-dropped in, to years in the wilds of Alaska, and finally back to an office to archive and rescue some of the earliest data from this field. He has helped improve our understanding of a mysterious, expansive layer of the atmosphere that we nonetheless rely on for things as simple as driving directions, says Benson.

"Everyone wants to know when to turn right or left when driving down the road," he says. "And the military wants to make sure that the missile arrives at the correct military target. Our GPS radio signals travel through the ionosphere and under normal conditions that works well, but when there's a strong ionospheric storm your links to the GPS satellites can fail completely." In addition, there are many important non-communications satellites in the ionosphere and these can be damaged during magnetic storms, so scientists wish to be able to forecast this kind of space weather just as meteorologists forecast weather on Earth.

A side effect of studying such phenomenon for Benson has been research time spent in cold environments, since much space research is done near the magnetic poles where solar wind particles can more easily slip down magnetic field lines. He studied physics at the University of Minnesota, was part of the first group to spend the winter at the South Pole Station in 1957, and attended graduate school in Alaska.

Upon graduating from college, he took a job as a scientist on the 18-person – and one dog -- team that was the very first to winter at the geographic South Pole in 1957, during the International Geophysical Year. He was there under the leadership of Paul Siple, a man who first went to Antarctica as a Boy Scout with Admiral Richard Byrd and who had substantial Antarctic experience. The group spent the first few weeks securing the South Pole base for the winter, setting up their scientific instruments, and retrieving supplies that were dropped in around them by parachute.

The sun set on March 21, and after a few weeks of twilight, Benson and his colleagues settled in for nearly six months of darkness with temperatures typically between -60° to -80° F. (Which felt additionally cold, due to the wind. In fact, Paul Siple was the man who invented the concept of and the equations for the wind chill index for his PhD in 1939.) Benson was 21 years old when he arrived at the South Pole, and he remembers Siple as a dynamic leader who worked longer hours out in the cold than anyone else and who, much to the group's dismay, doled out the supply of movies slowly so morale wouldn't run too low at the end of the winter if there were only re-runs to be had.

Benson's scientific work at the South Pole station included the study of the ionosphere using something called an ionosonde. This instrument sends radio waves up into the atmosphere and measures the time it takes them to bounce off the ionosphere and return, carrying information about the height and density of the ionosphere. Bouncing radio communiqués off the ionosphere to distant locations was at the time a common method of communication, so understanding its effects was crucial. Indeed, there was some concern that the ionosphere above their station would disappear during part of the winter disrupting radio communications with the outside world. While there were times when communications were difficult, radio contact with relatives and friends in the U.S. was possible throughout the long winter via ham radio.

"My wife, Marilyn, never says how many years we spent in Alaska," says Benson. "She says, 'We spent four winters in Alaska.'" Alaska is where he learned to respect the cold. "In Alaska you always went out in survival mode. You never went on a long trip by car in the winter without sleeping bags in the trunk, because there might not be anybody to help you if your car broke down."

While in Alaska, Benson continued to study the ionosphere. Made up of electrons and ions that stretch across the inner layer of Earth's magnetosphere, the ionosphere not only affects the performance of radio communication systems but is the site for auroras and many complex physical processes. And, as Benson likes to point out, it is the easiest, cheapest space environment to investigate because it is filled with the same kind of electrified gas, or plasma, that surrounds the sun and other objects in our solar system.

In the early 1960s, technological advances enabled scientists to send ionosondes up on spacecraft high up in the ionosphere. The first satellite to carry such an instrument was the Canadian-built Alouette 1, launched in 1962 by the US. For the first time with Alouette 1, the "topside" of the ionosphere could be routinely observed.

"That first one," says Benson, "Some people at NASA thought it wouldn't last more than a few months – that was a typical lifetime at the time. It was launched in 1962, and I have a plaque here displaying an Alouette-1 ionogram recorded after ten years in space." Benson continued his work on Alouette 2, launched in 1965, and two additional Canadian satellites ISIS 1, launched in 1969 and ISIS 2 launched in 1971, both of which were supported until 1990, pumping out data that led to thousands more of those curled films for Benson's microfilm reader.

Not all of the data were put on film due to cost considerations. Some were simply kept on magnetic tapes and left to sit in a storage house in Canada. So, in 1992 when the Canadian government announced it could no longer store the tapes, Benson led a restoration project initially funded by NASA's Ionosphere, Thermosphere, Mesosphere (ITM) Data Evaluation Panel to convert the tapes to digital data. "It's like having a new satellite mission suddenly appear with all this historical data," says Benson. "There have been many publications written on these observations."

Much of the original ionospheric data is only available on film, so Benson's microfilm reader isn't ready for the Smithsonian yet. Like the machine itself, Benson will continue to use technologies and stories from the past to look forward and improve our understanding of Earth's magnetosphere.