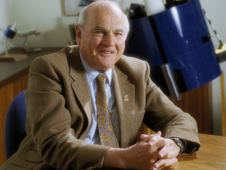 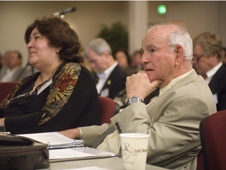 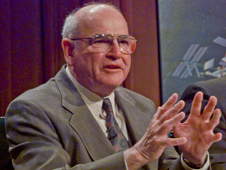 Click image for full resolution.
Dr. Baruch Blumberg was introduced as the first director of the NASA Astrobiology Institute during a press conference held at NASA's Ames Research Center in May 1999.
Image credit: NASA/Dominic Hart

Nobel Prize winner Dr. Baruch "Barry" Blumberg, who served as the first director of the NASA Astrobiology Institute at NASA's Ames Research Center, died of an apparent heart attack while attending a conference at Ames on Tuesday, April 5. He was 85.

Blumberg served as the first director of the NASA Astrobiology Institute from 1999 to 2002. He is best known as the winner of the 1976 Nobel Prize in Medicine for identifying the Hepatitis B virus. Blumberg shared the Nobel Prize with D. Carleton Gajdusek for their work on the origins and spread of infectious viral diseases.

Blumberg was a featured speaker and participant at the International Lunar Research Park Exploratory Workshop being held in the NASA Ames Conference Center when he was stricken.

"Barry Blumberg was a great biochemist and researcher," said Ames Center Director Pete Worden. "He was a leading light in the scientific community and a great humanitarian. He also was a loyal and supportive friend to NASA, Ames Research Center and the nation's space program."

A native of New York, N.Y., Blumberg had been a member of the Fox Chase Cancer Center in Philadelphia since 1964 and held the rank of University Professor of Medicine and Anthropology at the University of Pennsylvania since 1977. Since 2005, he had served as president of the American Philosophical Society, the oldest learning society in the United States, dating back to 1743. He had been a member of the society since 1986.

Blumberg first entered the graduate program in mathematics at Columbia University, but soon switched to medicine and enrolled in Columbia's College of Physicians and Surgeons, graduating with his M.D. in 1951. He remained at Columbia Presbyterian Medical Center for the next four years, first as an intern and then as a resident. He began his graduate work at Balliol College, Oxford, where he earned his Ph.D. in 1957.

"The world has lost a great man," said former NASA Administrator Daniel Goldin, who served as NASA administrator from 1992 to 2001. "Barry saved lives through his research on the Hepatitis B virus. He also inspired a whole generation of people worldwide through his work in building the NASA Astrobiology Institute. On a personal level, he improved my life through his friendship. Our planet is an improved place as a result of Barry's few short days in residence."