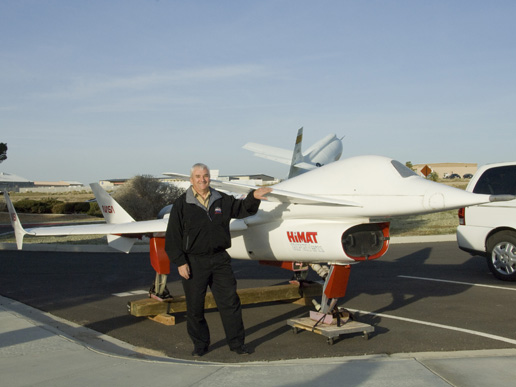 Retiring NASA Dryden Flight Research Center director Kevin Petersen got an April Fool's Day surprise when he drove in to work on April 1st -- the HiMAT remotely piloted research aircraft sitting in his parking space in front of Dryden's main building. The sub-scale aircraft had been in storage at NASA Ames Research Center since the Highly Maneuverable Aircraft Technology project, on which Petersen had been a research engineer, ended in 1983. With the assistance of Dryden's maintenance chief Tom Grindle, the HiMAT aircraft was brought back to Dryden recently without Petersen's knowledge, cleaned up and positioned in his parking space overnight. The HiMAT aircraft will eventually be placed on permanent display at Dryden.