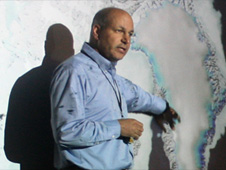 Abdalati is currently the director of the Earth Science and Observation Center at the University of Colorado at Boulder. He also is an associate professor in the university's geography department. Between 1998 and 2008, Abdalati held various positions at NASA in the areas of scientific research, program management and scientific management. His research has focused on the study of polar ice cover using satellite and airborne instruments. He has led or participated in nine field and airborne campaigns in the Arctic and the Antarctic.

Abdalati will represent all of the scientific endeavors in the agency, ensuring they are aligned with and fulfill the administration's science objectives. He will advocate for NASA science in the context of those broader government science agendas and work closely with the White House Office of Science and Technology Policy and the Office of Management and Budget.

"We are excited to have Waleed return to the agency during such a critical transition period," Bolden said. "His experience, wide-range of scientific knowledge and familiarity with NASA will greatly benefit the agency. He will be a true advocate for our many and diverse science research and exploration programs."

Abdalati is a fellow of the Cooperative Institute for Research in Environmental Sciences, a joint venture between the University of Colorado at Boulder and the National Oceanic and Atmospheric Administration. His research examines how and why the Earth's ice cover is changing and what those changes mean for life on our planet.

He has published more than 50 peer-reviewed papers, book chapters, and NASA-related technical reports, with approximately 1,500 citations in the peer-reviewed literature. Abdalati has received numerous awards for his research and service to NASA, including the Presidential Early Career Award for Scientists and Engineers, a NASA Exceptional Achievement Medal, and two NASA Group Achievement Awards.