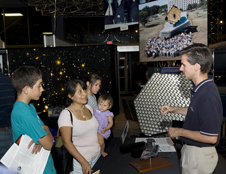 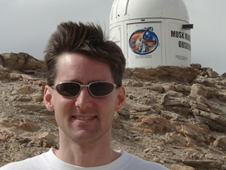 "I'm thrilled to share the excitement of the revolutionary James Webb Space Telescope Project with Imagination Station visitors," said Bos, who works at NASA's Goddard Space Flight Center, Greenbelt, Md. "I first decided that space exploration was my life's calling after a childhood visit to a museum and I hope that our presentation will inspire someone from the next generation of explorers to come and join us in the adventure."

At the time of the presentation, visitors will also be able to see pieces of items associated with the Webb telescope including the unique composite material that was created by NASA engineers to withstand the extreme environments of space, a piece of the telescope's massive sunshield and a sample of the "microshutter." Visitors will also receive a unique bookmark that explains a star's life cycle.

The event ties in with NASA’s traveling museum exhibition, New Views of the Universe which is currently at the Imagination Station museum and runs until January 16, 2011. The exhibit immerses visitors in the mystery and magnificence of the Hubble Space Telescope mission and introduces them to Hubble’s successor, the James Webb Space Telescope.

"Imagination Station is a science center dedicated to inspiring in children the wonder of science," said Anna Kolin, Communications and Public Relations Manager for the museum. "We're thrilled to be offering our community the opportunity to see Hubble's legacy and what the future holds for space exploration with the James Webb Space Telescope."

The 2,000 square-foot exhibit immerses visitors in the magnificence and mystery of the Hubble mission and introduces the James Webb Space Telescope. A scale model of the Hubble is the focal point of the installation. "Satellite" units incorporate hands-on activities about how the telescope works, and feature Hubble's contributions to the exploration of planets, stars, galaxies, and the universe.

The exhibit contains images and data taken by Hubble of planets, galaxies, regions around black holes, and many other fascinating cosmic entities. The exhibit is comprised of backlit color images and numerous interactive displays. Using a computer, visitors will be able to "hit" Jupiter with a comet and attempt to put star clusters in order of age. Using an infrared camera, visitors can also learn about the different wavelengths of light by taking pictures of their hand in visible and infrared light.

Visitors will learn about the James Webb Space Telescope, the next-generation premier space observatory, exploring deep space phenomena from distant galaxies to nearby planets and stars. The Webb Telescope will give scientists clues about the formation of the universe and the evolution of our own solar system, from the first light after the Big Bang to the formation of star systems capable of supporting life on planets like Earth.

Through computer games, videos and displays, visitors will also be able to experience how the Webb telescope will work. Visitors will learn about the cutting-edge technology of the Webb telescope like one that will see the universe in infrared light. All the new technology will enable scientists to see far back in time to when galaxies first formed and make many scientific breakthroughs.

The Imagination Station, located on the downtown Toledo riverfront, is a science center dedicated to delivering science and technology based programming to youth and their families throughout Northwest Ohio and Southeast Michigan. All activities are included in the cost of admission. Imagination Station is located at One Discovery Way, Toledo, Ohio, 43604. For more information, please call 419-244-2674 or visit imaginationstationtoledo.org.

The Webb telescope project is managed at NASA's Goddard Space Flight Center in Greenbelt, Md. The telescope is a joint project of NASA, the European Space Agency and the Canadian Space Agency.