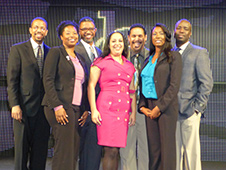 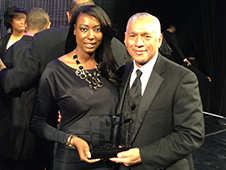 Special Recognition awardee Aisha Bowe with NASA Administrator Charlie Bolden. Credit: NASA. Ten distinguished NASA employees have been recognized in this year's Black Engineer of the Year Awards (BEYA). The ten awardees are from three NASA centers and received their awards during a three-day conference Feb. 7-9, 2013 in Washington, D.C.

The Black Engineer of the Year Awards 2013 was hosted by the Council of Engineering Deans at Historically Black Colleges and Universities, Lockheed Martin Corporation, US Black Engineer & Information Technology magazine and is sponsored by Aerotek. The awards recognize the achievements of African Americans in science, technology, engineering and math (STEM) and encourage young black Americans to pursue careers in STEM fields.

"At Ames we pride ourselves on our diverse workforce and our inclusive atmosphere," said Dr. S. Pete Worden, director of NASA Ames Research Center, where eight of the ten NASA awardees work. "We recognize that diversification is an ongoing process but it is encouraging to see such a high number of NASA employees winning these significant awards."

The NASA recipients of 2013 Black Engineer of the Year Awards include:
Trailblazer awards: Modern-day Technology Leaders awards: BEYA is the nation’s largest gathering of STEM professionals and leaders committed to increasing the percentage of underrepresented communities in the technology workforce. Fewer than 700 people have been the recipients of these prestigious awards and 2013 marks the 27th anniversary of officially recognizing black excellence in STEM fields. James Schalkwyk
Ames Research Center
› Back To Top