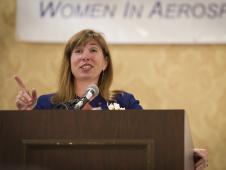 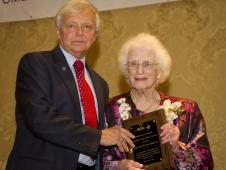 Four current NASA leaders and one retiree were recognized for their work by Women in Aerospace at the organization's annual awards ceremony and banquet on Tuesday, Oct. 26. The event celebrates women's professional excellence in aerospace and honors those who have made outstanding contributions to the aerospace community.

NASA Administrator Charlie Bolden presented Women in Aerospace's Outstanding Member Award to Garver, noting her ongoing leadership and participation in the organization and her passion and dedication to opening the high frontier of space to the everyday person.

Bolden said, "On behalf of NASA, I want to recognize all of our honorees for the breadth of their accomplishment and the passion they bring to the agency. Their achievements are truly enlarging our field and amazing the world."

Prince, an aerospace engineer at NASA's Langley Research Center in Hampton, Va., received the Achievement Award for her work in the development of autonomous aerobraking, used on missions such as the Mars Reconnaissance Orbiter, and her contributions to planetary mission atmospheric flight.

Recognized for her dedication and innovative contributions to building public awareness for aerospace, Beck received the Aerospace Awareness Award. She is an outreach program manager in the Space Operations Mission Directorate at NASA Headquarters in Washington.

Roe was a co-recipient of the Leadership Award for her dedication to inspiring current and future generations of women and her work to deliver innovative solutions to meet the nation's aerospace and atmospheric science challenges. The co-recipient of the Leadership Award was Mina V. Samii, vice president of Computer Sciences Corporation in Lanham, Md.

A highlight of the evening was when NASA's Ed Weiler, associate administrator for the Science Mission Directorate at NASA Headquarters, presented Women in Aerospace's Lifetime Achievement Award to Nancy Grace Roman, who was NASA's chief astronomer before her retirement. Weiler reviewed Roman's esteemed career at NASA and her trailblazing role in astronomy and government leadership, noting that her efforts were instrumental in making the Hubble Space Telescope a reality.

The evening also included the awarding of the first WIA scholarship, funded by the WIA Foundation, and given to women pursuing undergraduate technical degrees to encourage them to enter careers in the aerospace field. Whitney Lohmeyer, a senior at North Carolina State University, was the recipient.

Women in Aerospace is celebrating its 25th anniversary, and NASA leaders have been involved with the organization throughout its history. The organization has previously recognized NASA leaders for their contributions. Lynn Cline, deputy associate administrator for the Space Operations Mission Directorate at NASA Headquarters, received the Outstanding Member Award in 2009.


Related Links:
› View Photos from the Event on Flickr→