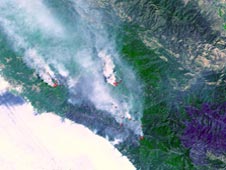 A remotely piloted aircraft carrying a NASA sensor flew over much of California in mid-July, gathering information that will be used to help fight more than 300 wildfires burning within the state.

The flights by NASA's unmanned Ikhana aircraft are using a sophisticated Autonomous Modular Scanner developed at NASA's Ames Research Center at Moffett Field, Calif. The flights are originating from NASA's Dryden Flight Research Center at Edwards Air Force Base, Calif. Ikhana's onboard sensor can detect temperature differences from less than one-half degree to approximately 1,000 degrees Fahrenheit. The scanner operates like a digital camera with specialized filters to detect light energy at visible, infrared and thermal wavelengths.

NASA and the U.S. Department of Agriculture's Forest Service have partnered to obtain imagery of the wildfires in response to requests from the California Department of Forestry and Fire Protection, the California Governor's Office of Emergency Services and the National Interagency Fire Center.

"NASA's emergency imaging gives us immediate information that we can use to manage fires, identify threats and deploy firefighting assets,” California Gov. Arnold Schwarzenegger said. “I thank NASA for providing us with this important firefighting tool that will help us maximize attacks on the more than 300 active fires currently burning in California."

The Ikhana aircraft is imaging almost 4,000 square miles from Santa Barbara north to the Oregon border. The flights provide critical information about the location, size and terrain around the fires to commanders in the field in as little as 10 minutes. The first mission on July 8 flew over 10 individual and complex fires along a route over the Sierra Nevada Mountains, west to the Cub Complex fire and south to the Gap Fire in Santa Barbara County. 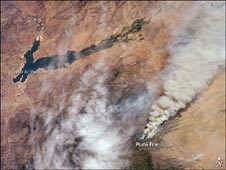 Fire images are collected onboard Ikhana and transmitted through a communications satellite to NASA Ames. There, the imagery is superimposed over Google Earth and Microsoft Virtual Earth maps to better visualize the location and scope of the fires. The imagery is then transmitted to the Multi-Agency Coordination Center in Redding, Calif., and the State Operations Center in Sacramento, which distribute fire data to incident commanders in the field.

From a ground control center, NASA pilots are flying the aircraft in close coordination with the Federal Aviation Administration, which is allowing flights within the national airspace while maintaining safe separation from other aircraft. The FAA is allowing NASA unprecedented flexibility to fly these missions in support of the California firefighting effort.

NASA was working with the Forest Service on a demonstration mission later this summer, but moved up the schedule in response to the widespread fires. The system was proven during a series of wildfire imaging demonstration missions in August and September 2007 and tested operationally during the Southern California fires of October 2007.

NASA's Applied Sciences and Airborne Science programs and the Earth Science Technology Office funded development of the fire sensor. In the hands of operational agencies, the benefits of this NASA research and development effort can support nationwide wildfire fighting efforts.

NASA satellites also are capturing imagery of the wildfires to fill in gaps in airborne imagery. For a collection of the latest NASA satellite and Ikhana images, visit: