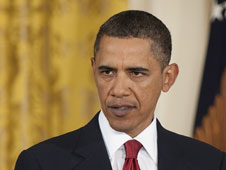 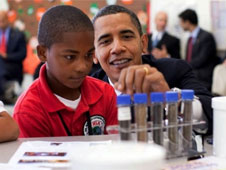 President Barack Obama helps a student with a science experiment in Summer 2009. Photo Credit: The White House NASA has launched an initiative to use its out-of-this-world missions and technology programs to boost summer learning, particularly for underrepresented students across the nation. NASA's Summer of Innovation supports President Obama's Educate to Innovate campaign for excellence in science, technology, engineering and mathematics, or STEM, education.
› Transcript: President Obama's Remarks→

The Summer of Innovation program will work with thousands of middle school teachers and students during multi-week programs in the summer of 2010 to engage students in stimulating math and science-based education programs. NASA's goal is to increase the number of future scientists, mathematicians, and engineers, with an emphasis on broadening participation of low-income, minority students.

"This is an incredible opportunity for our administration to come together to address our nation's critical science, technology, engineering and math education needs," said NASA Administrator and former astronaut Charles F. Bolden. "Through Summer of Innovation, NASA is calling on our financial and human resources to align with federal, state, and local governments, nonprofit partners, universities and teachers to expand the opportunity for more of our young people to aspire to and engage in the future prosperity of our nation."

Through competitive cooperative agreements to states, and partnerships with companies and nonprofits, NASA will use its substantial STEM assets -- including the agency's scientists and engineers -- to create multi-week summer learning programs.

"NASA's Summer of Innovation will increase the scope and scale of the agency's commitment to a robust program of STEM education opportunities," said Joyce Winterton, assistant administrator for education at NASA Headquarters in Washington.

The Summer of Innovation pilot will infuse NASA content and products into existing, evidence-based summer learning programs at the state level coupled with design competitions and events open to students and teachers nationwide. The program will culminate in a national event, in partnership with other departments and agencies.

NASA will use the Summer of Innovation as a catalyst to expand, align, and strengthen existing state-based networks. Awardees will be expected to implement the Summer of Innovation program and services during 2010 through the strategic infusion of NASA content and products into existing, evidence-based summer learning programs. The pilot program will seek to improve STEM performance for a diverse population of students, placing them on a trajectory to pursue further studies in STEM fields throughout their education.

Contingent upon the availability of funding, NASA intends to competitively select district partnerships in up to seven states to pilot the Summer of Innovation during 2010. Awards will have a period of performance of 36 months. Local programs will be required to develop ways to keep students and teachers engaged during the school year and to track student participants' performance through 2012. Awardees will be encouraged to leverage the unique capabilities and resources of program partners to ensure a sustainable effort following the period of performance.

NASA will use the agency's National Space Grant College and Fellowship Program to implement the Summer of Innovation pilot. The Space Grant national network includes more than 850 affiliates from universities, colleges, industry, museums, science centers, and state and local agencies supporting and enhancing science and engineering education, research and public outreach efforts for NASA's aeronautics and space projects. These affiliates belong to one of 52 consortia in all 50 states, the District of Columbia and the Commonwealth of Puerto Rico.

Space Grant applications will be selected based on alignment with Summer of Innovation goals and objectives. Accordingly, NASA has determined that submitters for this opportunity must be Space Grant Lead Institutions, and only one proposal per state will be accepted.

The Summer of Innovation Notice of Intent will be available online at 3 p.m. EST at http://nspires.nasaprs.com and http://www.grants.gov.

› More About NASA's Education programs
› Back To Top