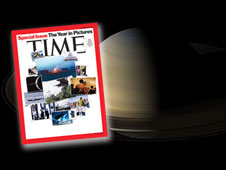 The photo, released in September and dubbed "The Rite of Spring," was the first up close view from a spacecraft from Earth of Saturn's equinox, when the sun's disk is directly overhead at Saturn's equator. That sun angle illuminates the gas giant's famous rings edge-on, opening up a new perspective.

As Cassini imaging team leader Carolyn Porco tells Time, "The geometry revealed structures and phenomena in the rings we had never seen before. We saw this famous adornment spring from two dimensions into three, with some ring structures soaring as high as the Rocky Mountains. It made me feel blessed."

The spectacle occurs twice during each orbit Saturn makes around the sun, which takes approximately 10,759 Earth days, or about 29.7 Earth years. Earth experiences a similar equinox phenomenon twice a year; the autumnal equinox will occur Sept. 22, when the sun will shine directly over Earth's equator.

For about a week, scientists used the Cassini orbiter to look at puffy parts of Saturn's rings caught in white glare from the low-angle lighting. Scientists have known about vertical clumps sticking out of the rings in a handful of places, but they could not directly measure the height and breadth of the undulations and ridges until Saturn's equinox revealed their shadows.

"It's like putting on 3-D glasses and seeing the third dimension for the first time," said Bob Pappalardo, Cassini project scientist at NASA's Jet Propulsion Laboratory in Pasadena, Calif. "This is among the most important events Cassini has shown us."

Time isn't the only publication recognizing NASA for outstanding imagery this year:
› Back To Top