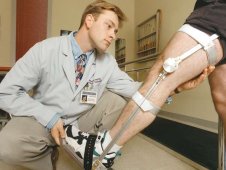 The space shuttle zips along at 17,000 mph. The Ares rocket will go from zero to 1,000 mph in 57 seconds. NASA knows a thing or two about making things go faster.

Here on Earth, a NASA-enhanced knee brace is helping patients speed up their recovery times.

Once upon a time at a meeting at the Marshall Center, orthotist Gary Horton met NASA engineer Neil Meyers. During a chat about knee braces, Meyer revealed the basics for a new type of brace with a lockable joint and hinge brake.

Intrigued by the possibilities, Horton licensed the NASA technology and worked with the University of Arkansas to perfect the design. Seven years of development and testing created the Stance Control Orthotic Knee Joint (SCOKJ), which became available in 2002.

Horton's brace helps patients with weak or missing thigh muscles -- the quadriceps -- and various degrees of knee instability. This might include people fighting polio, spinal cord injuries, and conditions like unilateral leg paralysis. It also speeds recovery when injuries won’t allow the knees to carry a person's full weight.

The brace is effective because it mimics natural motion in the human knee. Stand up for a minute. Now look down at your knee. When you're standing, your knee is in a "locked" mode for balance and stability. Now take a few steps. When you walk, your knee has two modes: free motion and automatic stance control. If you needed to use a more traditional brace for an injury, it would support your knee but also limit its movement.

Here's where space technology kicks in. When a patient wears the lockable knee brace, the knee has support AND freedom of movement. While walking, the brace lets the knee swing naturally. Each time the heel strikes the ground, the brace locks to provide stability, just like a healthy knee. When the heel lifts to take another step, the brace automatically unlocks and lets the knee return to free motion.

Depending on a patient's needs, the brace can be adjusted to be triggered by weight bearing or joint motion. This smooth, automatic action allows a normal walking gait and stability when standing. Not only does this speed up a person's ability to get around, but it also helps speed up healing.

It's just one more way that NASA technology is helping knee patients get a leg up on their recovery.

You can read the entire article on the locking knee brace on page 54 in Spinoff 2008.


Stance Control Orthotic Knee™ is a trademark, and SCOKJ® is a registered trademark of Horton Technology Inc.
Find this article at:http://www.nasa.gov/topics/nasalife/knee_brace.html