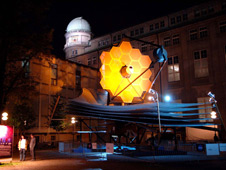 The Webb telescope life-sized model is as big as a tennis court, and its coming to the Maryland Science Center at Baltimore's Inner Harbor from October 14 through 26, 2011. It's a chance for young and old to get a close-up look at the successor to the Hubble Space Telescope in the same size it will be launched into space.

The real James Webb Space Telescope is currently being built, but this model will be constructed in a couple of days. The real Webb will be the largest space telescope ever built. Once in orbit, the Webb telescope will look back in time more than 13 billion years to help us understand the formation of galaxies, stars and planets.

Experts will be on hand to discuss the Webb telescope's deep-space mission, how it will observe distant galaxies and nearby stars and planets, and the progress made to date in building the observatory. Spokespeople will also be available throughout the model exhibition.


The full-scale model of the James Webb Space Telescope is constructed for the 2010 World Science Festival in Battery Park, NY. The model takes about five days to construct. This video contains a time-lapse sequence of the construction process. Credit: NASA/Mike McClare

The full-scale model of the Webb telescope was built by NASA's prime contractor to provide a better understanding of the size, scale and complexity of the observatory. The model is constructed mainly of aluminum and steel, weighs 12,000 lbs., and is approximately 80 feet long, 40 feet wide and 40 feet tall. The model requires two trucks to ship it and assembly takes a crew of 12 approximately four days.