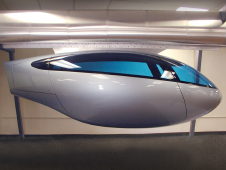 NASA officials have signed an agreement with Unimodal Systems, LLC to collaborate on the use of NASA-developed control software and human factors techniques to evaluate acceleration, jerk and vibration of an advanced transportation vehicle system. The control software was originally designed to control robots and other applications. The collaboration will help NASA better understand the software’s usefulness, human performance and safety.

“This collaborative effort is anticipated to help NASA with its aeronautics and space activities, while Unimodal gets to develop the next generation high-speed transportation system,” said Jeffery Smith, deputy chief of the Entrepreneurial Initiatives Division at NASA Ames Research Center, Moffett Field, Calif. “NASA will receive valuable feedback from our systems software usage.”

Per the agreement, Unimodal will contribute its SkyTran vehicle, currently located at NASA Ames Research Park, and its advanced transportation technology; NASA will provide its Plan Execution Interchange Language (PLEXIL) and Universal Executive (UE) software to control the vehicle.

In the future, SkyTran will use small vehicles running on elevated, magnetically levitated (maglev) guideways, which distinguishes it from other railed systems. The vehicles are lightweight, personal compartments that can transport up to three passengers. Travelers board the pod-like vehicles and type their destinations into a small computer. Using intelligent control system software, SkyTran will run non-stop point-to-point service without interrupting the flow of traffic.

These vehicles will eventually travel up to 150 mph and move 14,000 people per hour, both locally and regionally. SkyTran will serve as a feeder system to other transit systems, such as BART and high-speed rail.

Both organizations will mutually benefit. NASA will receive feedback on its software’s usefulness in ground-based propulsion systems, while Unimodal will develop a transportation system designed to eliminate traffic congestion, mitigate greenhouse gases and reduce dependence on foreign oil.

“For cities across the nation, SkyTran will create greentech jobs and launch a new era of public-private partnerships that will make public transit affordable to install, and profitable to operate," said Perkins.