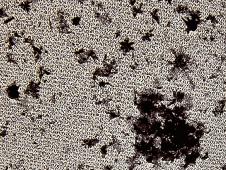 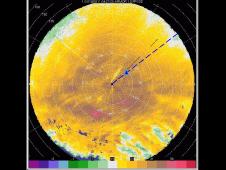 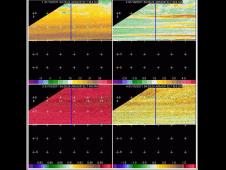 Four ARMOR radar vertical cross-sections taken through a snowstorm. (NASA/UAHuntsville)
View large image/full caption A city that rarely sees snowfall, Huntsville, Ala., was blanketed the evening of Jan. 9 under several inches of snow following a winter storm that also produced a rare "thundersnow" or lightning flashes. This unique weather event allowed scientists at NASA's Marshall Space Flight Center and the University of Alabama in Huntsville the opportunity to assemble one of the most detailed snowfall datasets on record for the deep southern tier of the continental United States.

Scientists in Huntsville were eager to measure the snowstorm's effects since the city hadn't seen a storm of this magnitude since March of 1993 when the city received a record 7.3 inches of snowfall. As the flakes started to fall, researchers worked to deploy several advanced radars, a large collection of snow particle measurement instrumentation and a 3-D lightning location array to gather storm data.

Advanced instruments known as "dual-polarimetric" radars from UAHuntsville scanned the snow-producing clouds Sunday night and Monday morning, measuring precipitation contents, and wind-flow while ground-based camera and laser imaging systems measured individual snowflake sizes, the rate of fall of the snowflakes, and the amount of melted water associated with the snowfall.

"NASA's GPM mission has invested significant resources in equipment that can help us better determine what an orbiting, satellite-based remote sensor sees at the top of Earth's atmosphere when it is snowing or raining at the surface of the Earth," said Petersen. "The snowflakes and raindrops produced in clouds between the Earth's surface and the top of the atmosphere cause changes in the microwave radiation measured at the top of the atmosphere. These changes occur as a function of the cloud thickness, as well as precipitation type and shape, and are particularly sensitive to the presence of snowflakes or raindrops."

The snowstorm provided an excellent opportunity for Petersen's team to take detailed measurements of precipitation and use those observations as a type of database or model to simulate what the constellation of GPM satellites would see from space. By combining the observations at the ground with those of the polarimetric radar, Petersen's team expects to learn a great deal about the processes responsible for creating the snowfall, and more accurately measure the water content of the snow from space and the rate at which that snow-water equivalent accumulates on the ground.

"The snow rate accumulation is important for winter weather preparedness on Earth," said Petersen. "Several of the Southern states were criticized for their lack of planning. It would mean a great deal if we could predict the intensity of the storm to allow cities more opportunity to be ready for this type of once in a decade weather event."

Petersen and his team worked in tandem with researchers and scientists from the Department of Atmospheric Science led by Professor Kevin Knupp at UAHuntsville. Knupp's team deployed the UAHuntsville mobile X-band radar (MAX) and used it to scan over the top of the NASA GPM instruments at the National Space Science and Technology Center in Huntsville. By combining the radar measurements from at least two of the radars, Knupp's team hopes to relate the wind flow within the storm to the precipitation measurements taken by Petersen. Knupp noted that "the atmosphere was full of gravity waves," features in the atmosphere that produce rapid up and downward motions and enhance the rate at which snow falls.

"Our team feels lucky and even surprised to have been able to marshal our collective resources to sample such a unique event in this part of the United States," said Petersen. "A team of scientists, including Dr. Lawrence Carey, Patrick Gatlin and Matt Wingo of UAHuntsville, just finished making similar measurements in Finland, yet here we are doing something similar in Huntsville, of all places."

The combined research team was able to collect the most detailed observations of thundersnow -- including the actual propagation path of individual lighting flashes -- ever collected in the Southeastern United States. These observations will help the NASA and UAHuntsville teams determine how electrical processes in thunderstorms function by comparing the observations to those collected in more frequently observed summer thunderstorms.

The ARMOR radar and Northern Alabama lightning-mapping array projects represent collaborative efforts between the Marshall Center and team members and partners from the University of Alabama in Huntsville. These efforts are funded in part by the NOAA/NASA GOES-R satellite program, NASA’s Tropical Rainfall Measuring Mission and Global Precipitation Measurement Missions, all managed by NASA’s Goddard Space Flight Center in Greenbelt, Md., and NASA's Earth Science Division in Washington.