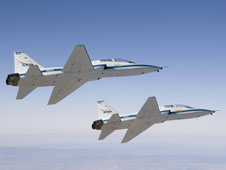 NASA's In this image from 2007, two T-38 aircraft fly in tandem.
Credit: NASA/Jim Ross
View larger Image NASA, in cooperation with the Federal Aviation Administration, will conduct training and photographic flights on Thursday, April 5, over the Washington, D.C. metropolitan area.

Two T-38 training jets will fly approximately 1,500 feet above Washington between 9:30 and 11 a.m. EDT to photograph the area.

T-38 aircraft have been used for years to train pilots. Years before the space shuttle would glide home to a safe touchdown on runways in California and Florida, astronauts pitched the noses of T-38 jet trainers toward the same runways to find out what it would look like to land a spacecraft in such a way.

The T-38 remains a fixture for astronaut training more than 30 years later because the sleek, white jets make pilots and mission specialists think quickly in changing situations, mental experiences the astronauts say are critical to practicing for the rigors of spaceflight.

"It's actually our most important training that we do as astronauts," said Terry Virts, pilot for the STS-130 mission aboard space shuttle Endeavour. "It’s the one place where we're not in a simulator. It's real flying and if you make a mistake, you can get hurt or break something or run out of gas. There are a lot of things that happen real-world in a T-38 that don't happen in the simulator."

Powered by two afterburning General Electric J85 engines, a T-38 can fly supersonic up to Mach 1.6 and soar above 40,000 feet, about 10,000 feet higher than airliners typically cruise.

If the flights must be cancelled for any reason, they will be rescheduled and an additional notice will be released.

For more information about T-38 training jets, visit: http://www.nasa.gov/mission_pages/shuttle/flyout/t38flyout.html.
› Back To Top