Grow Text SizeShrink Text Size
Teen Sailor Meets NASA Team That Helped Save Her Life
It has been almost six months since 16-year-old Abby Sunderland’s 40-foot vessel, Wild Eyes, was damaged in a storm, leaving her stranded in the middle of the Indian Ocean. But today, she finally got a chance to meet the people who developed the technology used to save her life.

Abby visited NASA’s Goddard Space Flight Center in Greenbelt, Md., on Oct. 25 to meet Search and Rescue Manager Dave Affens and a team of engineers. He and his team developed the Search and Rescue Satellite (SARSAT) technologies that contributed to her rescue. “Without NASA technology, she may have lost her life,” Affens said. “This case was more interesting than most because we contributed to every aspect of it.

“The system is great, super actually,” Sunderland said about the search-and-rescue technology that pinpointed her exact location during the aggressive storm.


After giving a presentation about her extraordinary journey from Marina Del Ray, Calif., to her dismasting 2,000 miles from the nearest land, Sunderland took questions from the engineering team and a group of congressional staffers, who were also in attendance, regarding the moments that led up to her rescue and the safety measures and devices she used during her ordeal. In addition, Affens explained in detail to Sunderland and the group how SARSAT technology operates. 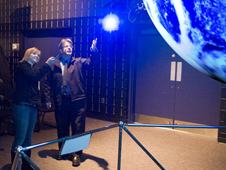 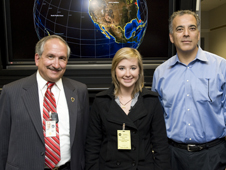 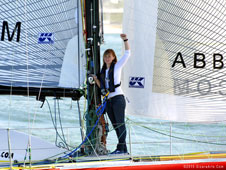 Abby Sunderland waves from her vessel, Wild Eyes, as she attempted to be the youngest person to sail the world solo, a record previously held by her older brother. Credit: GizaraArts.Com
› Larger image 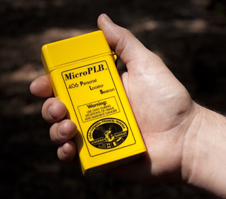 A MicroPLB Type GXL handheld device used to transmit distress signals — similar to the one Abby Sunderland was given by Microwave Monolithics Inc. (MMInc.)before her journey. All 406 MHz emergency beacons should be registered, and Search and Rescue authorities encourage owners of these beacons to do so as registration will help rescue forces find persons in distress faster in an emergency. Credit: NASA Goddard/Rebecca Roth
› Larger image “We developed the concept of detecting distress signals by the satellite, relaying it to the ground stations where the locations were calculated,” Affens explained. “We then launched the distress-detection device on a NOAA weather satellite, tested the concept, and approved the system for operational use.

Currently, the SARSAT system has saved more than 205 lives in the United States this year alone. However, Affens and his team are developing new technology that will detect distress signals in less than five minutes, a process made possible by placing repeater technology on the Air Force’s network of Global Positioning System (GPS) satellites. The current system, which places the technology on the Geostationary Operational Environmental Satellite or GOES (which alerts) and the Polar Operational Environmental Satellite or POES (which provides the location of the distressed) could take up to an hour or more depending on the location of the satellite.

Sunderland's signal reached an Indian satellite (INSAT) and two NOAA weather satellites that were launched by NASA and used NASA technology to pinpoint her location less than an hour later.

“It was a real surprise when the airbus flew over me. I wasn’t expecting it, I was expecting it to be weeks,” she said about the amount of time it took for her rescue to begin. “When you set off your beacon, you know someone is going to hear you, but I wasn’t sure if I was going to be helped. But I don’t think it could have been done any faster,” she added.

Also critical to her rescue was a small, yellow device that Microwave Monolithics Inc. (MMInc.) in Simi Valley, Calif., had developed under a NASA Small Business Innovation Research (SBIR) program award. The MicroPLB Type GXL handheld device -- about the size of a BlackBerry -- emitted an emergency distress signal picked up by a SARSAT satellite orbiting 22,500 miles up in space. The satellite also was equipped with NASA-developed repeater technology that then relayed the signal to the United States via the international satellite-aided search and rescue network now comprised of 40 participating nations.

The company’s president, Daniel Ch’en, had given Sunderland the beacon before she attempted to sail the world solo and non-stop, a record previously held by her older brother, Zac. “I wasn’t expecting her to use it, and I was hoping she wouldn’t have to, but I knew this would be the last line of safety [if needed],” he added.

The company originally developed the device for the U.S. government. It is the only sub-miniature PLB certified by the international satellite-based search and rescue community. It operates for a minimum of 48 hours after the user activates the emergency signal. These extra hours are vital given that most rescue teams cannot reach the individual until after a storm subsides, which can be more than a day or two. In Sunderland’s case, the boat sent to rescue her arrived two days after she had activated her device. Most PLBs, in general, are not made for 48-hour operation.

Because Sunderland used the device correctly and made a point to register the beacon with NOAA (adding personal and contact information), the U.S. Coast Guard’s Pacific Area Command in Alameda, Calif., was able to contact her parents in less than 10 minutes.

“We couldn’t ask for a better scenario,” said U.S. Coast Guard’s Adolfo Viezca, also in attendance. “When beacons aren’t registered and I’m on the receiving end, I don’t know who you are, where you are and I end up with a quagmire.”

Sunderland isn’t discouraged by her ordeal. She still plans on sailing the world solo, carrying the beacon and relying on NASA technology of course. “Overall, it’s the best experience of my life,” she said.

After meeting with Affens and his team, Sunderland was able to enjoy the other revolutionary science and technological developments at Goddard. Center Director Rob Strain presented her with a glass globe with an image of the Hubble Space Telescope emblazoned inside as a keepsake. In addition to enjoying the Visitors Center exhibits, including the Science On a Sphere globe, Sunderland visited the Earth Science and LRO control centers, and the Spacecraft Test & Integration Facilities.