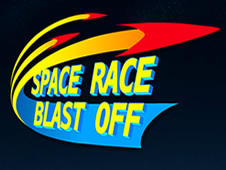 Who was the first American to walk in space? Who launched the first liquid-fueled rocket? In what movie did O.J. Simpson play NASA astronaut?

If you know the answers to these questions, or are just curious to find out, you're ready to play Space Race Blastoff, NASA's first online game for the social media age.

NASA chose to make the game available through Facebook to take advantage of the social media site's large audience and enable players to compete against others. Individuals can also play solo games.

Once in the game, players can choose an avatar and answer 10 multiple-choice questions. Each correct answer earns 100 points, with a 20-point bonus to the player who answers first. The winner advances to the bonus round to answer one additional question for more points. Answering the bonus question earns the player a badge, which may depict an astronaut, a spacecraft, a planet or other person or object. Additional badges can be obtained for 1,500 points.

The game, developed by Scott Hanger, Todd Powell and Jamie Noguchi of NASA's Internet Services Group in the Office of Communications, is available via its Facebook page: http://apps.facebook.com/spacerace.
› Back To Top