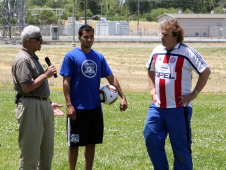 Stephen Beitashour, a professional soccer player from the San Jose Earthquakes, was asked to demonstrate kicking the ball for his student audience. He and Rabi Mehta (left) answered students’ questions that were sent to Greg Pitzer (right).
Click photo for larger image. 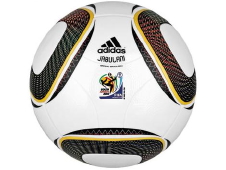 The aerodynamically designed soccer ball, called Jabulani, which its Zulu for "celebration."
Click photo for larger image. With the increased globalization of soccer, more young people are playing the sport and developing motor skills to compete effectively. To enhance their skills, students in the United States and Canada recently were given the opportunity to discuss with a NASA scientist the aerodynamics of the newly designed soccer ball.

On June 11, the 2010 Soccer World Cup kicked off with a new, aerodynamically designed soccer ball, called Jabulani, which is Zulu for “celebration.” This is not the first time the soccer ball has been redesigned. It also received a new surface in 2006, causing players to complain about its unpredictable movement. This time, the ball has another new surface, but does it improve the performance and behavior of the ball for the players?

To help student soccer players better understand the movement of the ball, NASA scientists at the Fluid Mechanics Laboratory at NASA’s Ames Research Center, Moffett Field, Calif., recently tested the performance of the Jabulani design, and compared it to the 2006 design. For the last World Cup in 2006, the soccer ball’s maker, Adidas, declared it was the most accurate soccer ball ever made. The original design had 32 hexagons of synthetic leather panels; the new ball had 14 thermally-fused panels and no internal stitching. Adidas called this smoother, rounder ball Teamgeist, or “team spirit.”

But the new design did nothing to lift players’ spirits. Players complained that the new design was wobbly, unpredictable in flight, and made the goalie’s job of blocking the ball even more difficult. This year, Adidas reduced the number of panels to eight and gave the surface aerodynamic ridges. After laboratory testing, NASA scientists are predicting that players will not have much better control of this new ball.

"It's quite obvious. You're seeing a knuckle-ball effect," said Rabi Mehta, an aerospace engineer at NASA Ames. Mehta explained that when a relatively smooth ball with seams flies through the air without much spin, the air close to the surface is affected by the seams, producing an asymmetric flow. This asymmetry creates side forces that can suddenly push the ball in one direction and cause volatile swerves and swoops.

From his research on tennis and cricket balls in wind tunnels, Mehta believes that the Jabulani ball will tend to knuckle at 45 to 50 mph, which coincides with the speed of the ball during free-kick around the goal area. Another point made by Mehta, is that a lot of the stadiums for the World Cup are located at high altitude (Johannesburg is at 5,500 feet) and this will affect the ball aerodynamics as well, since the air density is lower. At this high altitude, the ball will tend to fly faster (less drag) and swerve less (less lift).

To test Mehta’s knuckling theory, Stephen Beitashour, a professional soccer player from the San Jose Earthquakes, was asked to demonstrate kicking the ball for his student audience. “The new ball moves a lot. When I hit it smack straight in the middle with force, it changes direction in the air. It’s harder to track, so players will have to focus more.”

Afterwards, Mehta and Beitashour fielded students’ questions from schools in the U.S. and Canada. Students from Rainier Middle School, Auburn, Wash., asked, “What impact does speed have on the knuckling effect?” Mehta explained, “The newer balls have a smoother surface. In the past, the soccer ball had a rougher surface, making the knuckling speed about 30 mph. Today, the ball starts to knuckle, or go wobbly, at a speed of 45 – 50 mph.”

Another Rainier student asked, “What affect does wind resistance have on the ball?” Beitashour said, “Wind has a major effect on the ball. Kicking the ball into the wind makes the ball curve a lot.”

“It’s relative speed that matters,” added Mehta. “If you have a 20 mph headwind, and you kick the ball at 20 mph, the ball is really going 40 mph. With a strong cross wind, you can make the ball curve without putting much spin on it. Wind is an important factor in all ball sports.”

Students thanked NASA for their first fluid dynamics lesson, and hope to score points with their teachers and soccer goalies in the upcoming weeks.