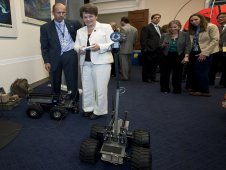 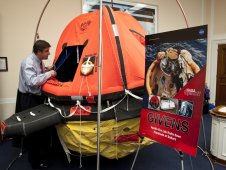 View large image
An igloo-shaped life raft and roaming robots were just a few of the NASA spinoff products showcased during the second annual "Spinoff Day on the Hill." Image Credit: NASA Congressional staffers in the Rayburn House Office Building on May 20 were wondering why a robot was roaming the halls. Those who followed the robot were led to further surprises: an igloo-shaped life raft, long socks full of fine powder, an inflatable antenna shaped like an enormous beach ball -- all NASA technologies that, through commercial partnerships between NASA and industry, are improving life on Earth.

The second annual Spinoff Day on the Hill, hosted by Representative Suzanne Kosmas of Florida, featured seven companies who have partnered with NASA to bring innovations to market that are saving lives, protecting the environment, and enriching how we experience our planet.

The 1958 Space Act that created NASA mandated that the Agency transfer as much of its technology as possible for the benefit of the public. To date, NASA has documented more than 1662 of these technologies, called spinoffs, in its annual Spinoff publication (http://spinoff.nasa.gov), launched in 1976.

"We invest in technologies for what they will bring to NASA in terms of future missions of science and of exploration, but we can never forget that we also invest in these things because of what they do for us right here on Earth," said NASA chief technologist Bobby Braun, who presented remarks at the event.

The products on show at Spinoff Day on the Hill all trace their origins back to space. The igloo-shaped life raft? Engineers at Johnson Space Center originally developed the self-righting raft design to prevent life rafts holding astronauts from capsizing from the downdraft of helicopters after Apollo-era splashdown landings. Now manufactured by Givens Marine Survival Co. Inc. of Tiverton, Rhode Island, the raft is credited with saving the lives of over 450 sailors.

Unirem Inc., managed by Summit International/Rasstech Industries, of Houston, exhibited its Petroleum Remediation Product, or PRP, developed through the collaboration of industry scientists and NASA researchers. The powder technology, which absorbs and captures oil as it floats on the water's surface, may soon play a role in the cleanup of the catastrophic oil spill currently endangering the nation's Gulf coast.

Airocide, a unique air purifier that helps preserve perishable foods and destroys airborne pathogens, was presented by KES Science and Technology Inc. of Kennesaw, Georgia, and Akida Holdings of Jacksonville, Florida. Originally developed by NASA-funded researchers to help preserve plants grown in space, the technology is improving food storage and distribution in remote regions of the world, as well as helping sanitize operating rooms and doctors' offices.

Gigapan photographic technology, derived from the panoramic camera mast assemblies on the Mars Exploration Rovers, awed attendees with its ultra-high resolution imagery, while the Webby Award-winning NASA@Home and City interactive Web site (http://www.nasa.gov/city) shared information about spinoff technologies that can be found in homes and hometowns across the Nation.

Braun noted the economic impact NASA’s technological advancements can create, leading to "more Earth-based spinoffs, more technology-oriented jobs, and more business and industries that can compete in the global marketplace." He also highlighted the inspiration such innovation provides to students exploring education and careers in science, technology, engineering, and mathematics.

"What we have here are just a few outstanding examples, but there are so many others to learn about," said Doug Comstock, director of NASA's Innovative Partnerships Program. "The fabric of our everyday lives benefits from these space technologies."

One such example zipped along the halls of the Rayburn building even as Spinoff Day on the Hill came to an end. The Multi-function Agile Remote Control Robot, or MARCbot, was enhanced by NASA engineers and is now manufactured by Applied Geo Technologies Inc. of Choctaw, Mississippi. More than 300 of the robots are now in service overseas, keeping soldiers safer by helping identify possible explosive devices.
by Bo Schwerin