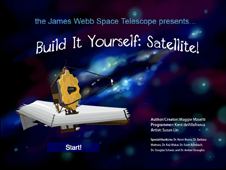 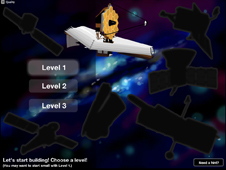 The player is challenged to figure out how to build a variety of different satellites in "Build It Yourself: Satellite." Credit: NASA, M.Masetti 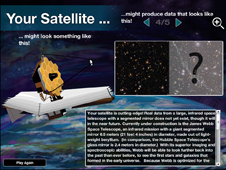 If you've ever wondered what it would be like to build a satellite to peer into a black hole and uncover its secrets, now you can find out thanks to a free new online game from NASA.

The new game, called "Build It Yourself: Satellite!" has been launched from the NASA Goddard Space Flight Center in Greenbelt, Md. and is a learning tool for students and adults. The game can be found on-line at http://www.jwst.nasa.gov/build.html.

"It's fun to play and users will learn something about satellite instrumentation and optics, and how they are used to make scientific discoveries, as well about a large range of different existing astronomical missions," said Maggie Masetti, NASA webmaster who authored and created the game at NASA's Goddard Space Flight Center in Greenbelt, Md. The game has players choose what science their satellite will study, and then decide what wavelengths, instruments, and optics will help them to learn the most about the science they chose. After "launch," the player will see what their satellite looks like, and learn what real mission has data similar to what their new satellite might produce. A large range of astronomical missions, dating from the 1980s to today are represented, from small X-ray telescopes like NASA’s Rossi X-ray Timing Explorer, to the large NASA/ESA Hubble Space Telescope, and beyond.

Make your game choices carefully and you could build a satellite very similar to NASA's next-generation James Webb Space Telescope, the original inspiration for this game. (The game is located on its website.) The cutting-edge Webb telescope is being built right now and will launch in 2018. It will help scientists see the secrets of the universe farther back in time toward the Big Bang by using infrared-vision. The Webb has a tennis-court sized sunshield, and a large segmented mirror that will make it the most powerful telescope ever built by NASA.

This game requires having FLASH 9 or higher on a computer. It opens in a separate window or tab and requires a few seconds to load all of the graphics components.

The game comes in two sizes, dependent upon the size of the user's monitor. For those with a slower computer, there is a special toggle button that will reduce the quality of the graphics and make the game run more quickly. The artwork in the game is by Susan Lin, and it was programmed by Kent deVillafranca.

"Build It Yourself: Satellite" gives everyone a chance to be an engineer and an astronomer by learning about the different instruments that can go on different kinds of space-observing satellites, and seeing what kind of cosmic discoveries they might make. Hopefully it will inspire someone to become a real engineer or a space scientist.

To build your own satellite, visit: