This is a still from the "All About Ozone" video created to expose the importance of atmospheric monitoring. All media were created by the student entrant, including original piano music, illustrations in Adobe Illustrator and 3-D animations in Autodesk Maya.
› Watch video on YouTube 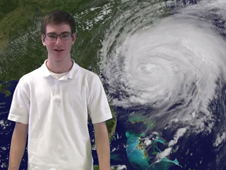 A still from "Hurricanes," a short educational video about hurricanes: their damage, intensity and structure, by Will Reiss and Erik Borchers at Cardinal Gibbons High School, Raleigh, N.C.
› Watch video on YouTube 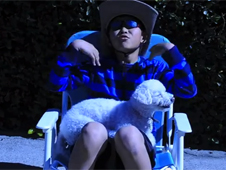 NASA has selected the winners of NASA's educational "REEL Science Communications" video contest. The three winning videos were created by students in New Jersey, North Carolina and California. There were also six videos chosen as runners-up.

The three winning videos were "All About Ozone," produced by Michelle Goffreda and Ananya Joshi of Lincroft, N.J.; "Hurricanes," by Erik Borchers and Will Reiss of Raleigh, N.C.; and "Ship Tracks," by Michelle Ko of Pasadena, Calif.

In the fall of 2012, NASA Earth science missions announced a video contest for high school students aged 13 to 18 to produce a video communicating NASA Earth science to younger students. This contest was sponsored by NASA's Aura, Aqua and Terra satellite missions. Students are consuming over 10 hours of media a day, and video is increasingly important to communicate and inform about science.

NASA challenged high school students with producing a two-minute video for a middle school audience that communicates one of the following science concepts: ozone in the stratosphere, ship tracks and our environment, or the water of the water planet. Student producers had to use NASA components including audio clips, animations, visualizations or satellite images to create their video by Feb. 15, 2013.

In the inaugural year of this contest, NASA received 48 entries from talented high school students who produced creative, well researched and engaging videos. "We were thrilled to receive dozens of impressive videos from clearly creative and enthusiastic science students from around the country," said Claire Parkinson, project scientist for the Aqua mission.

NASA producers, communications experts and scientists judged the videos for several factors that included: scientific accuracy, creativity, the use of NASA data and video quality.

"We had so many wonderful submissions it was hard to pick just one winner for each category," said Ginger Butcher, Aura outreach lead and creator of the contest. Winners and runners-up were posted on NASA's Aura mission website April 30.

The winners of the 2012 REEL Science Communications contest will get to experience what it is like being a NASA television producer this July. They will be given an assignment, get input and advice from NASA producers and have opportunities to interview NASA scientists. The final videos from this summer will be posted on NASA's website.

To see the winning videos, visit:

For more information about REEL SCIENCE, visit: http://aura.gsfc.nasa.gov/reelscience.html or https://www.facebook.com/NASAReelScience