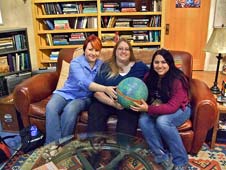 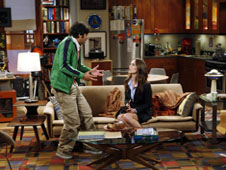 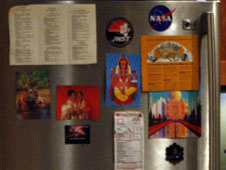 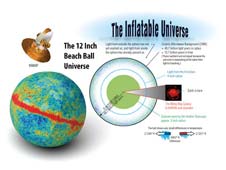 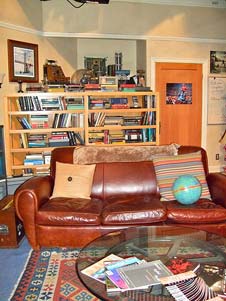 › View larger image
Living room set of Sheldon and Leonard's apartment in "The Big Bang Theory." Credit: NASA/Maggie Masetti It all started with a Big Bang. Well, actually, it all started with a beach ball. Not just any beach ball, but one that is printed with data from the Wilkinson Microwave Anisotropy Probe (WMAP). This educational beach ball was developed at NASA's Goddard Space Flight Center in Greenbelt, Md., and NASA's Blueshift team decided to blog about it. As a result, they ended up visiting the set of the popular CBS sitcom about geeky scientists, "The Big Bang Theory."

"We started Blueshift in 2007 to give the public a look at what's going on behind-the-scenes in Goddard's Astrophysics Division," said Blueshift's director, Sara Mitchell. "We're always looking for interesting ways to talk about astrophysics and what we do here - content that goes beyond the press releases and really public stuff." To that end, the Blueshift team gives the world a backstage pass to what's going on through blogs, podcasts, and social media like Twitter.

In August of 2010, Blueshift's Maggie Masetti started working on an article about the use of the WMAP beach ball as a unique teaching tool. In an interview, Britt Griswold, the designer of the beach ball, explained, "Imagine yourself at the center of this ball, looking in all directions. What you are seeing is the first visible light in the universe. It has been stretched by the very fabric of space/time as the universe has expanded so it now is microwave light, invisible to our eyes (but not WMAP's telescopes!)."

Britt mentioned that the WMAP beach ball has been featured several times in pop culture; it was used by Alan Alda on "Scientific American Frontiers" and it also sits on the bookshelf in the apartment of Leonard and Sheldon, two physicists on the TV show "The Big Bang Theory." The Blueshift team wanted a picture of the beach ball on the set for the article, but needed one they could use legally. On a whim, Sara tweeted at the co-creator/executive producer of "The Big Bang Theory," Bill Prady, asking if there was an image they could post on Blueshift. He responded almost right away, offering them the chance to come out and take a picture of the beach ball on set themselves.

A few short weeks later, the Blueshift team met up in Los Angeles (a trip timed to coincide with a conference on after-school education they were already attending) for a tour of the Warner Brothers Studio. Bill Prady and his assistant, Tara Hernandez, met them outside Stage 25 (which was used for, among many other productions, Casablanca) and took them onto the show's set. Waiting for them in the place of honor, right in the spot on the couch always reserved for Sheldon, was the WMAP beach ball!

The Blueshift team found it a thrill to see real astrophysical data on the set of a TV show, and it was very exciting for them to see the set itself. Leonard and Sheldon's apartment is the envy of every NASA nerd with bookshelves full of science books, old scientific instruments, and other items of geek interest. Bill told Maggie that he imagined Leonard bringing the old instruments home from the Pasadena Flea Market.

White boards covered in scribbled equations and diagrams are common at Goddard, and it's much the same here -- the apartment has several of them. The show's science advisor, Dr. David Saltzberg, a professor of physics and astronomy at UCLA, has a blog from which it's clear that a lot of effort goes into what's written on the show's white boards. Though only a portion of fans are going scrutinize them, it's nice to know that they care about appealing to that part of their audience. (When the Blueshift team was on set, the white boards were an homage to the movie "Real Genius" and its excimer lasers.)

Though currently in the entertainment industry, Bill Prady is actually a former computer programmer. In fact, he wanted to do a show about computer programmers -- an idea that eventually morphed into a show about scientists and engineers that work at Caltech. Bill liked the idea that scientists don't stop being scientists when they're not at work. He also felt that the audience didn't necessarily need to comprehend the science that the characters were doing to care about them or their lives.

On the other hand, Bill didn't want scientists in the audience to cringe the same way that doctors often do when watching medical shows. For example, recently, two of the characters were collaborating on a research project. "The question was," Bill told Sara during an interview, "What is this theoretical physicist working on that he pulls this astrophysicist into?" Dr. Saltzberg was able to come up with a plausible problem for them to work on. Bill added, "Of all the reviews the show has gotten, my favorite is, we're the only situation comedy to have been reviewed, and reviewed favorably, in the 'Journal of Science.'"

And then there's a time when Bill and "The Big Bang Theory" were downright prescient. Bill explains, "We did a story where [aerospace engineer] Wolowitz realizes that the toilet that he's designed and has been installed on the International Space Station is going to fail. And it's going to fail in space. And it's not going to be good. And about 2-3 weeks after the episode aired, the toilet on the International Space Station did fail and it failed almost exactly as we predicted it might. And I was kind of happy about this because we looked at the schematics for the toilet, and we said, 'Where is this thing weak?' so we could come up with what Wolowitz thinks might go wrong. We pinpointed what looked like a weakness and in fact that's how the toilet actually failed! The moral of the story is, if you're installing plumbing off the planet Earth, consult comedy writers!"

It was a great pleasure for the Blueshift team to go behind-the-scenes of "The Big Bang Theory" and to see how a show about fictional scientists is put together. As a thank you, the Blueshift team brought with them a variety of NASA outreach goodies from various NASA missions, including a scale model of the James Webb Space Telescope. Also included with the gifts was a special beach ball containing the latest WMAP data… and the signature of John Mather who, with George Smoot, won the Nobel Prize for his work on this first light in the universe and its relation to the Big Bang.

Though there was no expectation that these gifts would find their way to the show's sets, the NASA Blueshift team admits to having hopes that they might. They were rewarded when several of their NASA items were spotted in the episode "The Apology Insufficiency," which originally aired November 4, 2010. Appropriately, the Webb telescope model, plus some stickers, magnets, and a Solar Dynamics Observatory (SDO) poster, were used to decorate the apartment of astrophysicist Rajesh Koothrappali. Hopefully these objects will turn up in future shows, but in the meantime, keep an eye out for the WMAP beach ball, which still sits in its home on the shelf behind Leonard and Sheldon's couch. "The Big Bang Theory," created by Chuck Lorre and Bill Prady, airs Thursdays at 8 p.m. ET on CBS.