"This is a moon rock and it's on our kitchen table. This rock encapsulates all of the optimism and unlimited potential that Americans had at the time. It made me believe that anything is possible. I wanted kids of this generation to have this experience. So, although it wasn't easy -- I borrowed a Moon Rock from NASA."
--Debra Sea in "Moon Rock" 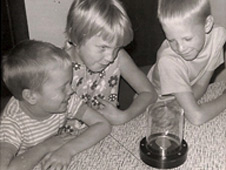 In 1970, Debra Sea and her brothers, David and William, admire a Moon Rock from Apollo 11 as it sits atop their kitchen table.
Credit: Sea Family

The sample that sat before Debra and two of her younger brothers in 1970 returned to Earth from Apollo 11. And it landed on her kitchen table by way of her father, Duane Sea, a former a NASA science demonstrator, also known as a Spacemobiler.

Duane and his Spacemobile traveled to schools across the Mid-West, reaching more than 400,000 students. In the summer, Debra and her siblings would go along for the ride.

"Like everyone else, we were wildly optimistic about the future of space science," Debra said.

"It was always a story I wanted to tell," said Debra. "The timing was perfect."

Perfect because she was a working on her Master's of Fine Arts (MFA) at the University of North Carolina Greensboro when she chose "Moon Rock" as her Master Production film project. She was one of three students chosen to receive a 2011 Carole Fielding Student Grants awarded by the University Film and Video Association. 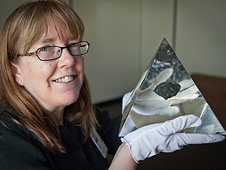 But Debra quickly learned that borrowing a Moon Rock from NASA was no easy task.

After six months and a great deal of determination, her Lunar Sample Application was approved. For pick-up, she was referred to NASA's Langley Research Center in Hampton, Va., because it was in her outreach region.

The larger, display Moon Rocks are considered a national treasure that cannot be shipped, only hand carried. With possession, comes a strict set of guidelines. It must be kept in sight or in a safe. It can't be kept in a motel room overnight. And don't touch the Lucite without gloves, because the oil from skin can damage and cloud the Lucite.

"We were like old friends," Debra said of the Moon Rock. Except this was a different rock -- from Apollo 14. And this time, she was responsible for it. That was quite the burden for Debra, who constantly worried about the rock, much like a mother worries for her child.

Meghan Guethe, Langley's exhibits manager, helped Debra through the process. She understood and appreciated Debra's desire to keep it safe. "Everything is priced when it is sent out with an exhibit," Guethe said. "We cannot price these." 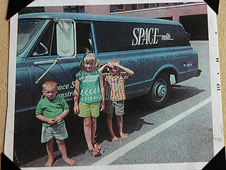 In the summer, Debra Sea and her brothers would travel in a Spacemobile driven by their father Duane, a former NASA Science demonstrator, also known as a Spacemobiler.
Credit: Sea Family

It took a lot of planning to prepare the invaluable Moon Rock's trip to three classrooms at Wadena-Deer Creek, a K-12 school in Minnesota, where Debra's brother David teaches. She created a contingency plan for each airport.

And when she and her film assistant Adrienne Ostberg, a first-year MFA student, had their last flight canceled, they rotated staying with the rock in a private, locked room, purposed for nursing moms.

Their "baby" was a Moon Rock, which was enclosed in a Lucite pyramid. The 115-gram rock had its own carrying case and a small brass plate on the case reads, "IF FOUND, RETURN TO -- NASA, JOHNSON SPACE CENTER, HOUSTON, TEXAS 77058."

Duane accompanied her to the school. And despite the fact that he hadn't worked for NASA in 40 years, he smoothly converted back into his Spacemobiler ways.

"Have you ever driven a nail with a banana?" Duane asked the students after dipping one into a container of liquid nitrogen and freezing it solid.

As the banana proved to have the power of a hammer, the looks of authentic amazement and surprise on the student's faces spoke powerfully. And so did their questions. 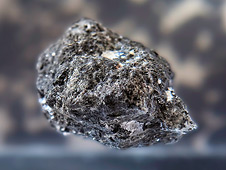 "Is this a magic trick?" a student asked.

"He had such a presence," Debra said of her father.

The Moon Rock temporarily abolished his presence. The students put gloves on and one-by-one touched the pyramid and gazed into the rock that had traveled some 238,857 miles (384,403 km) back to Earth 40 years prior.

"Everyone wanted to touch it, like a relic," Debra said of the students, and even airport security personnel that help her to guard it from harm.

But the contact that truly mattered was that of the students.

"I keep hearing that kids are different today than they were years ago. I just don't buy that," Duane said. "Kids are kids. The same eager faces that you see in front of you today are the same that I saw in front of me 40 years ago."

Debra and two of her brothers recreated the "Moon Rock" photo, and the moment that sparked their own sense of wonder. It seemingly had a great affect on them as each studied and works in a science-related field.

Whether Science or magic, their Moon Rock experience was afforded to a new generation. And now, it's up to them to decide what to do with it.

"I see incredible optimism and potential in these kids. And after bringing the Moon Rock home, I feel really hopeful about the future," Debra said. "I still believe that anything is possible. And I know I always will."