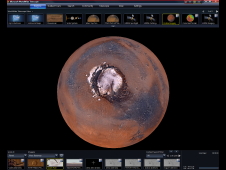 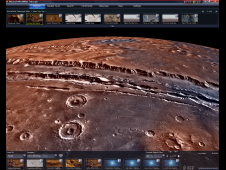 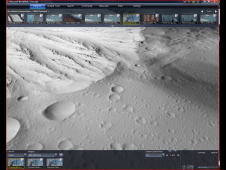 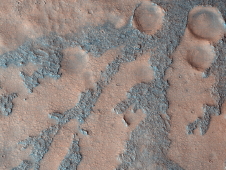 In this image from the High Resolution Imaging Science Experiment (HiRISE) camera on NASA's Mars Reconnaissance Orbiter, the dark branched features in the floor of Antoniadi Crater look like giant ferns, or fern casts. However, these ferns would be several miles in size and are composed of rough rocky materials. Image Credit: NASA/JPL-Caltech/University of Arizona
Click photo for larger image. 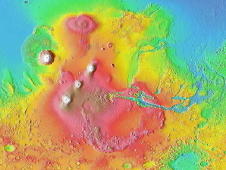 This is a shaded relief image from Mars Orbiter Laser Altimeter (MOLA) instrument on the Mars Global Surveyor spacecraft. Shown on the map are the Tharsis province including the major volcanoes, the Valles Marineris, and the Chryse outflow regions. The Argyre impact basin can be seen at the lower right.
Image credit: MOLA Science Team
Click photo for larger image. Today, Microsoft Research and NASA are providing an entirely new experience to users of the WorldWide Telescope, which will allow visitors to interact with and explore our solar system like never before. Viewers can now take interactive tours of the red planet, hear directly from NASA scientists, and view and explore the most complete, highest-resolution coverage of Mars available. To experience Mars up close, Microsoft and NASA encourage viewers to download the new WWT|Mars experience at http://www.worldwidetelescope.org.

Dan Fay, director of Microsoft Research’s Earth, Energy and Environment effort, works with scientists around the world to see how technology can help solve their research challenges. Since early 2009, he’s been working with NASA to bring imagery from the agency’s Mars and Moon missions to life, and to make their valuable volumes of information more accessible to the masses.

“We wanted to make it easier for people everywhere, as well as scientists, to access these unique and valuable images,” says Fay. “NASA had the images and they were open to new ways to share them. Through the WorldWide Telescope we were able to build a user interface at WWT|Mars that would allow people to take advantage of the great content they had.”

To create the new Mars experience in the WorldWide Telescope, Fay worked closely with Michael Broxton of the NASA Ames Research Center’s Intelligent Robotics Group (IRG). Broxton leads a team in the IRG informally called the Mapmakers, which applies computer vision and image processing to problems of cartography. Over the years, the Mapmakers have taken satellite images from Mars, the moon and elsewhere, and turned them into useful maps. Broxton says that getting the results of NASA’s work out to the public is an important part of his mission.

“NASA has a history of providing the public with access to our spacecraft imagery,” he says. “With projects like the WorldWide Telescope, we’re working to provide greater access so that future generations of scientists can discover space in their own way.”

It is the mission of Fay’s team at Microsoft to push the boundaries of technology in service of scientific discovery and advance the state of the art in computer science overall. He explains that the approach to the Mars WorldWide Telescope project was to provide information at your fingertips. As such, Fay says the WorldWide Telescope is as much a research project as a Web service — one that has resulted in a truly stellar experience for users.

“We were able to take the imagery from NASA, combine it with their elevation models and lay those onto the surface of the globe of Mars,” Fay says. “Now users of the WorldWide Telescope can zoom down and actually experience the surface-level detail of Mars. They can pan back and see the height of the craters or the depth of the canyons. The new Mars experience allows people to feel as though they’re actually there.”

In particular, there’s a new dataset from the University of Arizona’s High Resolution Imaging Science Experiment (HiRISE), a state-of-the-art, remote-sensing camera on NASA’s Mars Reconnaissance Orbiter. HiRISE collects incredible images of super high resolution — a quarter of a meter per pixel on average. Each HiRISE image is a gigapixel in size, containing 100 times as much information as a 10 megapixel off-the-shelf camera.

“Due to its size, the data set is too unwieldy for many people to work with,” notes Fay. “But that large data set is necessary to provide the most in-depth experience — the most beautiful images, which are full of information. We needed this immense level of data to even begin to attempt to create this unique Mars experience.”

To get those images out to the public in a new way, the team set an ambitious goal to take all of the HiRISE images, 13,000 or so, and stitch them onto a single coherent map. While HiRISE has only imaged about 1 percent of Mars, leaving vast regions of Mars still to be explored, all of the HiRISE images have now been geolocated on a single map, and correlated with other global Mars data sets. Dotted with HiRISE images acquired so far, this new coherent map is the highest-resolution map of Mars’ surface ever constructed.

“Not only is it going to be amazing for the general public to see, but it’s actually something that scientists have never been able to see before,” Broxton says. “This particular feat has never been attempted.”

The reason for that, he says, is the technical challenge behind the project. The resolution of the images is so high and the files so large that NASA has been crunching the raw data for three years now. For anyone who’s ever tried to edit a picture from a digital camera and had the computer spin on it for several seconds, multiply that by 100, or more. And then multiply the number of images by 13,000. Multiply the number of tasks by another dozen and you can begin to see why the process has never been attempted. Broxton leveraged Nebula, NASA’s high-performance computing cloud, to process the image data. In all, the HiRISE mosaic took 14 days to process on 114 CPUs and constitutes the entire collection that has been taken by the orbiting camera as of May 2010.

“It’s an indispensible archive of information, but it’s not very easy to access unless you have an expertise in processing lots of data,” Broxton says. “Nebula allowed us to take the data, process it into a format appropriate for the WorldWide Telescope, and then make the entire catalog of NASA’s Mars information available on desktops around the world through the WorldWide Telescope.”

The images themselves reside on the Nebula cloud at the NASA Ames Research Center, near San José, California. Fay says hosting the data offsite is not a new approach, but rather one that allows WorldWide Telescope to use imagery from just about anyone. Thanks to the magic of the cloud, other imagery on the site is hosted at Microsoft datacenters around the world. Hubble’s resides in Baltimore. The California Institute of Technology’s is in Pasadena.

Dr. Stoker was a scientist on the Phoenix Mission team, which landed a rover near the north pole of Mars to look for conditions that might be conducive to life. In her tour, she explains the thought process behind the question “Is there life on Mars?” and what the Phoenix Mission did to assess whether Mars has had conditions favorable for life.

Dr. Garvin’s tour walks through the history of Mars to establish why it’s so interesting to us, and what a possible human mission to the Red Planet might entail.

Retrieving images from all over the world is as smooth as any experience on the Web today. The secret is a tiling system that uses the visitor’s desktop computer to process the imagery. With such a huge amount of information contained in one coherent tool, users are able to browse and zoom into interesting locations as they please. Visitors to the WorldWide Telescope can now have the experience of flying though a 3-D rendering of Victoria Crater and Olympus Mons — a low valley and the highest peak in our solar system — and can experience firsthand the extreme elevation and intricate features on the Martian surface.

“We take advantage of the computing power you have on your desktop to allow a smooth, 3-D experience,” explains Fay. “As you zoom in, it’s a really constant view of these images. You can now get a true sense for what the terrain looks like.”

Broxton says the 3-D effect is derived from information provided by an instrument called MOLA, the Mars Orbiter Laser Altimeter, which measured altitude along the surface of Mars from space from NASA’s Mars Global Surveyor orbiter. The team also combined that information with a stereo image-reconstruction process — taking two images from different angles and using that to build a 3-D model of the terrain.

“These images give you a particularly visceral impression of, for example, the Mars Exploration Rover landing sites,” Broxton says. “You can see what it’s like in the hills there or zoom into surface craters. It’s really amazing stuff.”

For scientists and hardcore hobbyists, Fay’s team at Microsoft has developed another feature that puts the image in the context of the mission from which it was collected. Users can right-click on some of the images and find their original Web pages at NASA with additional details on the HiRISE project.

“So it’s not just the imagery, but bringing it together with the context,” Fay says. “We think that capability will make this an exciting tool for scientists and educators.”

So what is the surface of Mars like? According to Broxton, part of what’s striking about Mars is its similarity to what we’re used to here on Earth. Mars shares many of the same Aeolian (wind), tectonic, volcanic and even water processes, the effects of which are visible on the planet’s surface.

“I often think of Mars as being a beautiful, barren, sculpted desert much like the American Southwest,” Broxton says. “On earth, most of our craters have been erased because we have a much more active tectonic and volcanic process, but aside from that, there’s a lot of similarity.”

Back on Earth, Fay and his team are already looking at ways to continue building the WorldWide Telescope as a platform for advancing scientific learning, and a showcase for how technology can help facilitate understanding. He says that when he recently showed the new features to his son, the importance of that mission hit home.

“It gave my young son a sense of what the space mission is about, and why we as a nation invest in it,” he says. “I think that people who look at this will be amazed by these images and the detail of what these cameras can pick up. Seeing the solar system spinning in time, the details of the Martian planet, you could spend hours getting lost in space.”