Grow Text SizeShrink Text Size
NASA Technology Could Aid in Interpretation of Mammograms, Ultrasound, Other Medical Imagery
NASA software used to enhance Earth Science Imagery could one day aid in the interpretation of mammograms, ultrasounds and other medical imagery.

“The use of this computer-based technology could minimize human error that occurs when evaluating radiologic films and might allow for earlier detection of abnormalities within the tissues being imaged,” said Dr. Thomas Rutherford, a medical doctor and director of gynecologic oncology at Yale University.


The FDA recently cleared the system to be used by trained professionals to process images. These images can be used in radiologist's reports and communications as well as other uses, but the processed images should not be used for primary image diagnosis.

The entire indications for use: MED-SEG is a software device that receives medical images and data from various imaging sources (including but not limited to CT, MR, US, RF units), computed and direct radiographic devices, and secondary capture devices, (scanners, imaging gateways or imaging sources). Images and data can be stored, communicated, processed and displayed within the system or across computer networks at distributed locations. 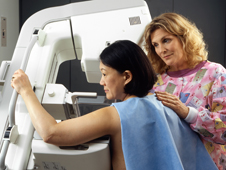 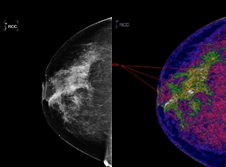 Tilton began working on his algorithm more than 25 years ago. His goal was to advance a totally new approach for analyzing digital images, which are made up of thousands of pixels. Like a single piece of a jigsaw puzzle, a pixel often does not provide enough information about where it fits into the overall scene. To overcome the deficiency, Tilton focused on an approach called image segmentation, which organizes and groups an image’s pixels together at different levels of detail. But Tilton’s approach to image segmentation was different than other approaches in that it not only finds region objects, but also groups spatially separated region objects together into region classes.

For example, an Earth satellite image may contain several lakes of different depths. Deep lakes appear dark blue, while shallow lakes are a lighter shade of blue. HSEG first finds each individual lake; then it groups together all shallow lakes into one class and the deeper lakes into another. Because lakes are more similar than they are to trees, grass, roads, buildings, and other objects, the software then groups all lakes together, regardless of their varying colors. As a result, HSEG allows the user to distinguish important features in the scene accurately and quickly.

Since Tilton developed the algorithm, scientists have used it to analyze Earth-imaging data from NASA’s Landsat and Terra spacecraft, using it to improve the accuracy of snow and ice maps produced from the data. Scientists also have used it to find potential locations for archeological digs, the premise being that vegetation covering a long-abandoned human settlement would look different than the surround flora.

“My original concept was geared to Earth science,” Tilton said. “I never thought it would be used for medical imaging.” In fact, he initially was skeptical; that is, until he processed cell images and was able to see details not visible in unprocessed displays of the image. “The cell features stood out real clearly and this made me realize that Barton was onto to something.”

Bartron learned of the software through Goddard’s Innovative Partnerships Program (IPP) Office, and in 2003 licensed the patented technology to create a system that would differentiate hard-to-see details in complex medical images.

“Trained professionals can use the MED-SEG system to separate two-dimensional images into digitally related sections or regions that, after colorization, can be individually labeled by the user,” explained Fitz Walker, president and CEO of Bartron Medical Imaging.

With the MED-SEG system, medical centers will be able to send images via a secure Internet connection to a Bartron data center for processing by the company's imaging application. The data are then sent back to the medical center for use by medical personnel during diagnosis. Bartron has installed the system at the University of Connecticut Health Center, with the possibility of installing evaluation systems at New York University Medical Center, Yale-New Haven Medical Center, and the University of Maryland Medical Center.

Through a Cooperative Research and Development Agreement, Tilton also worked with the company to develop, test, and document a new, three-dimensional version of HSEG, which the company plans to incorporate into the next version of the MED-SEG product.

In the future, Dr. Molly Brewer, a professor with the Division of Gynecologic Oncology, University of Connecticut Health Center, would like to do clinical trials with the MED-SEG system. The goal, she said, would be improving mammography as a diagnostic tool for detecting breast cancer. "One problem with mammograms is they often give a false negative for detecting abnormalities in women's breasts. Women who either have high breast density or a strong family history of breast cancer are often sent for MRIs, which are costly, very uncomfortable and have a high false positive rate resulting in many unnecessary biopsies. Neither imaging modality can detect cancers without a significant number of inaccuracies either missing cancer or overcalling cancer. In addition, reading these tests relies on detecting differences in density which is highly subjective. The MED-SEG processes the image allowing a doctor to see a lot more detail in a more quantitative way. This new software could save patients a lot of money by reducing the number of costly and unnecessary tests."

Tilton’s technology is not limited to medical imaging, said Enidia Santiago-Arce, the IPP technology manager for HSEG. “It can be applied to many types of image processing for a wide variety of fields, from monitoring crops to facial recognition to image data mining. HSEG is available for licensing beyond the field of medical imaging.”

NASA is releasing this story in conjunction with Breast Cancer Awareness Month.