Grow Text SizeShrink Text Size
NASA TV Program Wins Emmy
When Tom Shortridge was growing up in small Laurel, Del., with a population of 3,600, he knew he wanted to work in television. He graduated from a technical high school with a concentration in media broadcasting. There Shortridge helped produce daily school newscasts and a weekly news show that aired on local cable. He went on to major in communications in college with a minor in film and video.

But the 25-year-old never guessed some day he would be part of a team that would win a regional Emmy award for a NASA TV educational program geared towards high schools students and hosted by Vince Whitfield. "NASA Launchpad" took home a statuette in the Informational/Instructional category for its episode, "Bernoulli's Principle," at the 52nd Capital Regional Emmy Awards held in Washington, June 5.

"I didn't think we even had a chance to get a nomination for the Emmy, let alone win it," said Shortridge. "I guess I'd had dreams of winning a regional Emmy, but I figured if it happened, it would be years away." 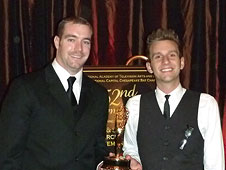 Even more amazing than the Emmy he says is the fact that he produces the show for NASA's Langley Research Center, through his employer the National Institute of Aerospace (NIA) in Hampton, Va. "If you told me when I was in high school that I'd win an Emmy working for NASA, I'd be more surprised by the NASA part," said Shortridge. "I was never that into science or engineering."

He credits the team of educators-in-residence at NIA for helping him and co-producer Scott Bednar make award-winning five to seven minute programs that apply science, technology, engineering and mathematics concepts learned in the classroom, to real world challenges.

"They're able to identify the science content to meet educational standards, which allows me to focus on the video production end of things and making sure the content is presented in a way that people like me, non-science-heads, can not only understand it, but be excited by it," said Shortridge.

Co-producers Bednar and Shortridge also work on other NASA "eClips" informational and educational projects, both web-based and broadcast on NASA TV.

Bednar also majored in electronic media and film with a concentration in TV production. "In college I had to make a decision which path to follow, science or media and working with NASA and NIA has allowed me to merge my passion for both," he said.

Like Shortridge, Bednar is at the beginning of his career. "I just turned 25 last week. The Emmy win will definitely help stave off my quarter-life crisis," said the New York Long Island native. "The Emmy nod, let alone win, was completely unexpected at this point in my career. To be honest, winning an Emmy was never even on my radar."

Also like his co-producer Bednar says the award is really a team award. "We work with such an amazing group of people that credit is truly deserved across the board," he said.

Along with the Emmy, NASA Launchpad has won 12 other awards, including the W3 Awards, Digital Video Awards, the Accolades and the Aegis Awards.