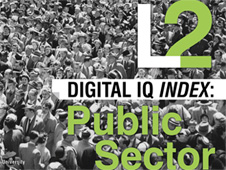 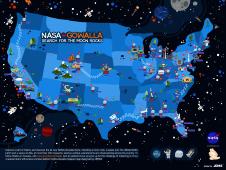 NASA's Gowalla partnership was cited as one example of NASA's success in social media.
Image Credit: NASA/Jess3
By a wide margin, NASA placed first in a study released Tuesday that ranks 100 public sector organizations in the effectiveness of their websites, digital outreach, social media use and mobile sites. The L2 Digital IQ Index for the Public Sector was conducted by New York University Professor Scott Galloway, Doug Guthrie, dean of the George Washington University School of Business, and a team of experts from L2, a think tank for digital innovation.

The study reports NASA "is in its own stratosphere" and the clear leader in digital use, noting the agency's innovation on nearly every platform. The 26 point spread between NASA and the next closest organization is the largest seen in any of L2's Digital IQ Index studies to date. Studies in the past year and a half have looked at more than 500 private and public sector organizations, including luxury, beauty, automobile, pharmaceutical and retail industries.

"NASA's goal is to communicate the important work of thousands in our nation's space and aeronautics missions as broadly as possible, and we employ numerous tools to do that," said David Weaver, associate administrator for Communications at NASA Headquarters in Washington. "We're pleased to be recognized for our efforts and look forward to expanding our outreach."

The report highlights NASA's use of Tweetup events, its recent partnerships with Gowalla and Foursquare, and the agency's social media aggregator site, the Buzzroom.

"NASA has been an innovator and a true leader when it comes to using social media and other digital tools to communicate about its important work," said Doug Guthrie, dean of the George Washington University School of Business in Washington.

To find all the ways you can connect and collaborate with NASA, visit NASA's Connect & Collaborate page.

To view the rankings and key findings, visit L2's site to download a PDF of the report.