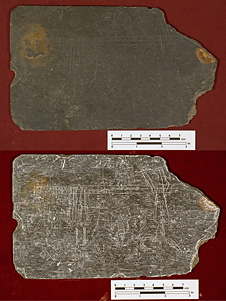 Jamestown archaeologists found a slate tablet covered with faint sketches, words and numbers thrown in what appears to be an original Jamestown well. These are two images of the same side of the tablet. Archaeologists 'chalked' the tablet to highlight the faint scratches. Credit: APVA 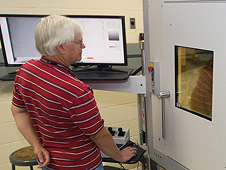 Portions of the tablet are covered with rust. NASA researchers -- including technician John Grainger, pictured -- are using a 3D X-ray system to see what's underneath it. Credit: NASA/Sean Smith

NASA researchers who normally study futuristic materials are using their high tech scanners to reveal the past.

NASA Langley has scanned dozens of artifacts for Preservation Virginia, since its Jamestowne Rediscovery archaeologists began the excavation of James Fort 15 years ago. But this is the first time researchers used a new, more sophisticated "micro-focus computed tomography x-ray system" that Langley installed last summer in its Nondestructive Evaluation Sciences laboratory.

"It's a three-dimensional imaging system that allows us to see inside materials without having to take them apart," said Ray Parker, nondestructive evaluation sciences engineer. "It's like a hospital CT scanner, only higher precision. We normally use it to inspect materials for aerospace use, like pieces of the shuttle or composites for hypersonic vehicles."

The eight-foot long, four-foot wide, six-foot high machine, called the X-Tek HMX-ST 225, uses X-rays and computer processing to create a 3-D "picture" of whatever it scans. In this case archaeologists are trying to determine what's written on the slate tablet they found.

"There's a deposit of rust on the tablet and it's covering up lettering and drawings," said Parker. "We're looking at the results of our scans to see if we read what's there."

This is the second time that Parker and technician John Grainger have worked with the Jamestown Rediscovery archaeologists. Last time they inspected a 16th century Scottish pistol found in one of the fort's wells.

"I think it's fantastic they're finding all this stuff and we get to inspect some of it," Parker said. "I've always had an interest in history. When I grew up we used to visit the Historic Triangle -- Jamestown, Williamsburg and Yorktown, Va. -- frequently."

NASA Langley started working with Preservation Virginia more than seven years ago helping to identify artifacts. That role expanded when NASA teamed with Jamestown 2007 to promote the spirit of exploration then, now and in the future. During the 18-month long celebration to honor the 400th anniversary of Jamestown, NASA even flew a small lead cargo tag, bearing the words "Yames Towne," and some commemorative mementoes on board the space shuttle Atlantis to commemorate the nation's pioneering spirit. Kathy Barnstorff
NASA Langley Research Center
› Back To Top