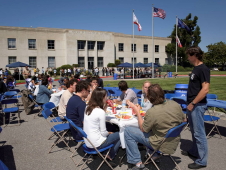 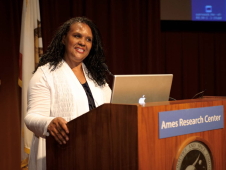 The summer may end but its memories will last forever. This was the sentiment at a farewell commencement last week at NASA Ames Research Center, Moffett Field, Calif., where hundreds of undergraduate interns, graduate fellows, and faculty from higher education programs and their mentors were acknowledged for jobs well done.

As the United States enters the second century of flight, NASA has committed itself to excellence in science, technology, engineering and technology (STEM) education to ensure that the next generation of Americans can meet our country’s future challenges. To help meet the demands of a technical workforce, NASA designed more than a dozen summer Higher Education projects that target America’s students and educators at all levels, but especially those in traditionally underserved and underrepresented communities.

This summer, hundreds of students and teachers came to Ames to participate in NASA’s STEM activities and learn how they are applied to its missions and technology programs. As an added benefit, NASA scientists, researchers and engineers assumed the roles of mentor and educator, developing and supervising multi-week summer learning programs. NASA focuses on engaging and retaining students in STEM education programs to ensure their success in a demanding and competitive workforce.

“NASA is about the future. We do three things here. We do science. We revolutionized physics with Dr. John Mather’s Noble-Prize-winning work on the Big Bang. We do things on Earth. For instance, we’re addressing how to study climate change. We also do human flight research. We’re on the verge of sending humans to another planet,” said S. Pete Worden, director of NASA Ames Research Center, Moffett Field, Calif. at the commencement. “To you students, I want to say: the future is the limit. You are our replacement.”

This was a wonderful day. Students and mentors gathered together to celebrate their achievements and say “we’re so glad we got to know you,” “thank you” and “best wishes.” Students participated in a variety of NASA’s higher education programs. Although education programs were diverse, students seemed similarly excited and inspired by the summer’s activities and events. After a ten-week tenure, NASA Ames acknowledged them as our next generation of explorers, innovators and entrepreneurs.

“I never did any research before. At Ames, I learned a new computer program, which I used to model engine data that is scalable for a new aircraft design,” said Adam Cortese, a graduate student at Georgia Technology University, Atlanta. “I really learned a lot this summer. The experience showed me how the aircraft industry works.” Cortese entered NASA’s first rotorcraft design competition at school and, consequently, was accepted into NASA’s Education Associates Program (EAP).

EAP is a unique workforce development education program. Its students are given hands-on experience with NASA scientists, engineers and program managers on a range of NASA projects and missions, and they also receive academic credit for the experience.

Another EAP student shared his appreciation of the NASA experience.

“At school, I was working on a NASA-funded project, called N+2. It’s a futuristic commercial airline that mounts the engines on top of the wing to make it quieter, and the wings are more blended with the body. My work on N+2 is what brought me to Ames,” said Bryan Castanza, a graduate student at California Polytechnic State University, San Luis Obispo. “In the future, I’d like to work at NASA Ames to flight test engines, or maybe start my own company some day.”

Serving underserved and underrepresented STEM students is the focus of many NASA higher education programs. One such program is Motivating Undergraduates in Science and Technology Project (MUST). Funded by NASA, it is a joint partnership between the Hispanic College Fund, the United Negro College Fund Special Programs and the Society for Hispanic Professional Engineers.

These students also were present and given the opportunity to do rewarding work at Ames. “At Ames, I worked like a researcher. In school, I followed directions. I was taught how to do things. Here, I was allowed to develop my own method of creating a compound. I was given a goal to make cadmium sulfide. I did the literature search, and selected the chemical to make it. I was given the freedom to be creative here,” said Olivia Lenz, an undergraduate chemistry student from Seattle Pacific University, Wash. who is a MUST program participant.

While learning experiences were designed to benefit students and teachers in the higher education programs, mentors also claimed satisfaction with the summer’s events. When asked to comment on mentoring these participants, they seemed very pleased with the amount and quality of the work performed over the summer. Experiences were diverse but similarly positive.

“I just want to say ‘thank you’ to my students,” said Pat Cowing, a psychology physiologist at Ames. “They worked hard and gave me a lot of support. I literally could not have done this job without their help this summer.”

As the ceremony drew to a close, STEM participants and mentors were asked to share their memorable experiences at NASA, or what important lessons they had learned in the last ten weeks. Responses were similarly hopeful and sincere.

“I really wanted to do well this summer. It was my one shot, and I wanted to take it,” said one student of his tenure at NASA. “I met great people here, and had some really exciting moments. I will definitely share my NASA experience with the world.” Ruth Dasso Marlaire
Ames Research Center, Moffett Field, Calif.
› Back To Top