As Millennium Force crested the peak of its first hill, 20 students took a deep breath and braced for a high-speed plunge toward the earth. The ride plummeted 310 feet at 93 miles per hour, and their bodies rose unwillingly from their seats. Thank heaven for the lap bar!

The Millennium Force is a 310-foot-tall roller coaster at Cedar Point Amusement Park in Sandusky, Ohio. And the lifting sensation the students felt as the coaster plummeted down its famous first hill is called free fall. It's similar to what astronauts experience as the space shuttle orbits Earth.

"Amusement parks are a great place to learn about spaceflight because a lot of the sensations you feel on roller coasters, like free fall and acceleration, are the same sensations that astronauts experience," said aerospace engineer Nancy Hall.

Hall works in the International Space Station Research Project Office at NASA's Glenn Research Center in Cleveland. She led a team of Glenn and NASA Plum Brook Station employees who taught science lessons during Cedar Point's Math and Science Week in May.

Roller coasters cause a series of low- and high-gravity sensations that mimic the free falls and accelerations of airplanes and spacecraft. As a coaster reaches the bottom of a hill or goes around a curve, the students feel their bodies pressing into their seats.

"That's the sensation of gravity and the acceleration of the roller coaster car catching them to start up the next hill," Hall said. Similarly, acceleration during launch makes astronauts in the space shuttle feel two to three times heavier than they are.

Coasters aren't the only amusement park attractions that can make students feel like space travelers. Other rides, such as Cedar Point's Power Tower, drop straight down from high in the air. For a brief period, while the passenger cars free-fall, gravity seems to be suspended. Like the students on the roller coaster, the passengers rise out of their seats.

Because they and the seat are falling at the same rate, the passengers' bodies aren't pushing on the seats anymore. The passengers become weightless and actually float above the seat. Any loose objects, like jewelry and purses float along with them. 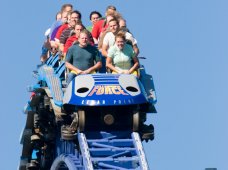 The Millennium Force roller coaster at Cedar Point Amusement Park. Credit: Cedar Point The same thing happens onboard the space shuttle or space station. Rather than falling down to the earth, however, the spacecraft falls around Earth in a curved pattern called an orbit.

"Because the force of gravity is pulling the spacecraft toward Earth, the spacecraft doesn't fall in a straight line," Hall said. "It falls in an arc around Earth."

If an astronaut tries to stand on a scale in orbit, the scale will read zero because the astronaut, the scale and the spacecraft all fall together.

NASA uses a variety of facilities to create the high- and low-gravity conditions of space travel. The Johnson Space Center, for example, operates a low-g research aircraft that flies in a path shaped like roller coaster hills, which we call parabolas.

The parabolas create 20-25 seconds of weightlessness so that researchers can investigate microgravity's effect on astronauts and experiments. A typical mission is two- to three-hours long and consists of 30 to 40 parabolas. Much like a roller coaster, the aircraft has gut-wrenching effects that have earned it the nickname, the "Vomit Comet."

NASA also uses drop towers to simulate weightlessness. Glenn's Zero Gravity Research Facility, for instance, is a large evacuated shaft measuring 432-feet deep. It allows scientific experiments to free-fall for five seconds. In this state of free fall, experiments are weightless like the passengers on the Power Tower.

Every year, amusement parks across the country host physics events to show students how the laws of physics apply to rides. For the past 16 years, Glenn scientists, engineers and educators have participated in Physics Days at Cedar Point, where they show students how rides that climb hundreds of feet above Earth's surface compare to space vehicles flying hundreds of miles above Earth. The event has been so successful that the amusement park devoted a whole week to math and science this year.