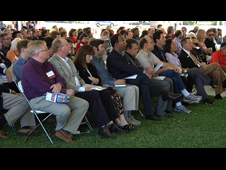 Click image for full resolution.
There were more than 400 attendees at the CMU 10 year anniversary event.
Image credit: NASA

In 2002, the NASA Research Park (NRP) began collaborative partnerships with academia, industry and non-profits to stimulate innovation and education in science and research disciplines critical to space exploration. NASA Ames partnerships were meant to create a dynamic, integrated research community that provides research and development (R&D) leadership into the 21st century. Key areas include astrobiology, information technology, biotechnology and nanotechnology. Today, the NRP has more than 90 partners.

One of the NRP’s first partnerships was Carnegie Mellon University. It has been a hub for developing creative software management leaders and entrepreneurial startups. More than 650 students have graduated from this beacon of technological achievement, and in a wide-variety of R&D programs. Since its inception in 2002, CMU’s Silicon Valley campus has quadrupled in size and helped launch more than a dozen startups.

“With more than 400 VIPS attending, it was a celebration of CMU’s outstanding success in Silicon Valley, highlighting R&D and education innovative collaborations with NASA Ames and many Silicon Valley companies, especially in high-tech applications to disaster planning and assistance,” said Michael Marlaire, director of NASA Research Park.

Many CMU Silicon Valley alums credit their career success to novel teaching, encouraging them to try new ideas, shedding those ideas quickly if unsuccessful and moving on to the next new thing. That problem-solving DNA, so intrinsic to the CMU culture, is demonstrated by the Silicon Valley entrepreneurship program.

"We are celebrating not just our academic achievements, but our important role as a change agent in the dynamic eco-system of Silicon Valley, said Martin Griss, director of CMU Silicon Valley campus. “We are excited to achieve the envisioned balance and synergy between innovative education, research and entrepreneurship."

For more information about the Silicon Valley campus anniversary, go to:


For more information about the Silicon Valley campus anniversary, go to: