About a decade ago, scientists discovered something about the "black earth" in the Amazon River Basin of Brazil that surprised them. They knew it was extremely fertile, unlike other soils in the region. 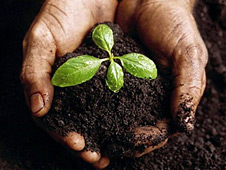 A plant grows in a biochar soil mixture. 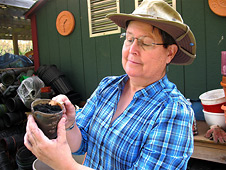 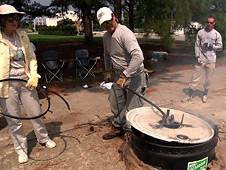 
How NOT to make biochar.
Don't use smashed up charcoal. Briquettes can contain harmful additives, and burned ones have very little active carbon.

They discovered that this black earth, or "terra preta" in Portugese, gets its richness from charred wood called biochar that was added by indigenous people to their farmlands over 700 years ago.

The discovery sparked interest in biochar as both a medium for enriching soil and as a way to fight global warming by reducing carbon dioxide in the atmosphere.

"We've been taking carbon stored underground for billions of years and putting it into the atmosphere," says Doris Hamill, a business development manager in the Strategic Relationships Office at NASA Langley Research Center in Hampton, Va. Making biochar is "basically the reverse of what we've been doing."

Plants take carbon dioxide out of the atmosphere and change it into plant matter. But when the plant dies, it is eventually broken back down to carbon dioxide. If that plant matter is converted into biochar, the carbon in it doesn't break down any further. Biochar's big benefit is its longevity -- it can last for thousands of years, said Hamill, who is working with local municipal officials to encourage use of the material in Virginia's Hampton Roads region.

"The best thing to do with biochar is put it into the soil, and it's very happy to be there. And when it's in the soil, it does a lot of good things," said Hamill. "It stays there for a long time, and provides a home for soil bacteria and other microbes that improve soil. Even small amounts of biochar are very, very good for the soil."

Biochar can be created by anyone with a couple of steel barrels, some wood and a match. A biochar "pyrolyzer" built by Langley's fabrication shop consists of a large barrel with a smaller barrel upside-down inside. Biomass to be converted to biochar is placed in the smaller barrel. Wood and other organic fuel goes around it inside the larger barrel to supply the heat for charring.

Fire it up, close it up, hang out for a while, and you have biochar.

While you're waiting, you can ponder the pyrolysis process, in which water and other chemicals are driven out of the wood in an oxygen-free environment that lets the material char but not go up in flames. This same basic process was used to make charcoal three thousand years ago and is used today to make advanced composite materials for NASA missions.

The biochar can then be augmented with fertilizer or other materials that enrich soil. Mixing biochar with the kind of fertilizer you can buy in a lawn and garden store reduces the amount you need to use by more than half, said Hamill, because it holds the fertilizer instead of letting it wash away. It also helps hold water in the soil.

For a variety of reasons, large-scale biochar production doesn't make sense economically yet, she said. That's why Hamill is out in the community encouraging people to make their own.

She's worked with the city of Hampton for about a year on a community biochar project. Master gardeners are testing different materials and mix ratios to enrich the biochar.

"We've come up with an initial small-scale method which involves a blender and some tablespoons and other kitchen things to produce something you could easily hand somebody to use," said master gardener Carol King.

For the many homeowners plagued by pine cones and gum balls, zapping them into useful biochar is the perfect solution, King said. "So this could be wildly popular!"

Hamill and her collaborators also are working on a "starter kit" that includes an instructional video, plans for making and using a pyrolyzer, safety tips and a global-warming primer.

A next step is involving 4-H students in a biochar project at Bluebird Gap Farm in Hampton. The students will gather wood, make biochar, mix it with nutrients, and add it to plots of vegetation. They will see how plants enriched with biochar grow compared to those that do not.

Hamill undertook the biochar project "on the side" as a way of using NASA resources to benefit the community, while fulfilling a personal goal -- "a desire," she said, "to help save the world from global warming."