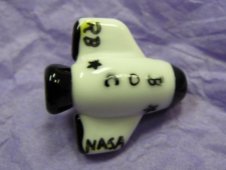 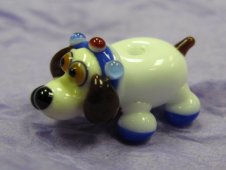 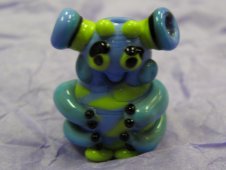 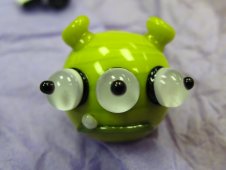 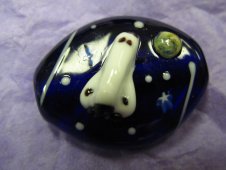 Images above show an assortment of the "Beads of Courage" designs that will fly on space shuttle Atlantis during the STS-132 mission. Image Credit: Beads of Courage

More Information
› Flickr: Beads of Courage Gallery
› Beads of Courage Web site
› Beads of Courage Facebook Soldiers, policemen and firemen risk their lives every day serving their country or community. Each day people stumble upon accidents or jump into frozen rivers to save survivors of plane crashes. We recognize these heroes for their acts of courage; medals, decorations and other rewards are bestowed upon them by an appreciative public official or superior officer.

How do you recognize and encourage a young child fighting a battle against a life-threatening disease? A battle that is no less dangerous and harrowing? A battle where the outcome is as uncertain as the dangers faced by more well-known heroes?

You present that child with a Bead of Courage.

Jamie Newton, an employee of CIBER Inc., a support contractor at NASA's Marshall Space Flight Center in Huntsville, Ala., knows about Beads of Courage. His six-year-old daughter, Sydney, has been battling cancer for more than a year. During that time, Sydney has received more than 450 beads -- each representing an entirely separate event in the process of her treatments.

"There really is no way to fully explain how the past year has affected us all; affected our family," said Newton. "It's been a really tough year. Sydney has done everything she’s been asked to do and more."

Early this year, Newton developed the idea of asking NASA about the possibility of flying some very special beads for Beads of Courage Inc., of Tucson, Ariz., on one of the final space shuttle missions.

Newton thought "nothing could be more encouraging to a child fighting cancer than to see a symbol of courage -- a bead -- actually flown to space by the very people who ride into orbit on the space shuttle. That act represents one of the most courageous things other human beings do for all of us."

The contest to design the space beads of courage ran from mid-March to mid-April and concluded with the selection of 17 bead designs. Realizing that only a handful of shuttle launches remained before the end of the shuttle program, Newton and Beads of Courage submitted a request to fly the beads to NASA. The Space Shuttle Program Office at Johnson Space Center in Houston approved the request to fly the beads as part of NASA's Official Flight Kit.

The space beads, designed by talented bead artists, will fly aboard space shuttle Atlantis with Commander Ken Ham, Pilot Tony Antonelli, and Mission Specialists Garrett Reisman, Michael Good, Steve Bowen, and Piers Sellers. The shuttle and its crew are scheduled to lift off on Friday, May 14 from NASA's Kennedy Space Center in Florida. After Atlantis returns from its mission, NASA will present the string of beads to Beads of Courage Inc. as a symbol of courage to sick children everywhere.

"It is a great honor to be a part of and support a wonderful organization like NASA," said Newton. "This opportunity to fly the Space Beads of Courage onboard space shuttle Atlantis will help children battling cancer and hopefully inspire them to be among the next generations of astronauts and engineers; making it possible for all of us to see what lies beyond our Earth."

"Since 2005, we have been working to transform the treatment experience for children coping with chronic, life threatening illness through our arts-in-medicine programs," explained Jean Baruch, founder of the Beads of Courage program. "We are honored to work with the NASA family on this worthy effort."