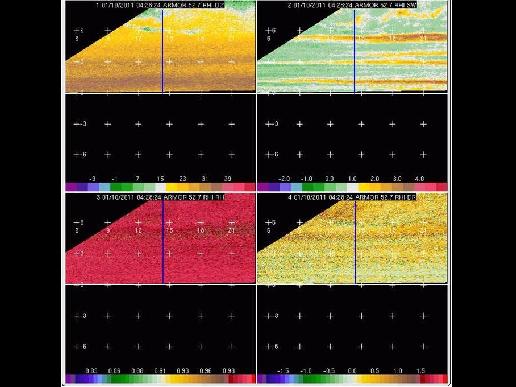 These images show four ARMOR radar vertical cross-sections through the snowstorm that blanketed Huntsville, Ala., on Jan. 10, 2011. They were taken at 10:28 p.m. CST over the NASA/University of Alabama in Huntsville science center. The blue line indicates the column of atmosphere over the top of the science center.

The upper left panel is the "echo" return, as in the first radar slide. The upper-right panel is a measure of turbulence in the air. Warmer colors -- yellows and reds -- indicate more turbulence. Note the interesting layered structure in the turbulence. In the lower right is the "correlation coefficient." It can indicate the degree to which snowflakes are similar to one another in shape, whether liquid water might be present and collecting on the snowflakes, and also how much the snowflakes are "wobbling" as they fall. The bottom right is a measure of snowflake orientation called "differential reflectivity" where larger values -- or warmer colors -- indicate flatter, more oriented snowflakes.

You may notice the banding in the colors. Scientist think is due to changes in how the snow grows while falling and encountering different temperature and humidity regions. Several of the lightning flashes they observed moved horizontally in the clouds along some of these bands, important information for determining how electric charge develops and distributes in snowstorms.