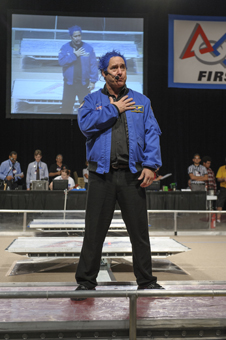 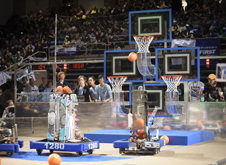 Click image for full resolution.
The all girl Space Cookies went undefeated until the finals, where they lost to the more experienced Cheesy Poofs.
Image credit: NASA Ames Research Center

2012 marked the 21st season of the For Inspiration and Recognition of and Science and Technology (FIRST) Robotics Competition, and included more than 50 teams competing for the Regional championship title that would give them a shot at the international championships in April.

“NASA Ames is extremely pleased with the performance of our star teams. Not only did they take first and second in the tournament, but also executed many impressive technologies,” said Mark Leon, manager of the NASA Robotics Alliance Project at NASA’s Ames Research Center, Moffett Field, Calif.

NASA Ames mentored teams Space Cookies #1868 and Cheesy Poofs #254 as part of NASA’s STEM effort, and both teams received NASA grants to support their robotics efforts. This year, both teams won all quarter and semi-finals. The all girl Space Cookies went undefeated until the finals, where they lost to the more experienced Cheesy Poofs. In the past five weeks, NASA-sponsored teams won 232 awards nationwide at FIRST Robotics Regional/District Competitions.

“I couldn’t attend the Silicon Valley Regional, but I watched the scores and rankings on my home computer. I was cheering for the Space Cookies team. I was ecstatic to see they had 10 wins and no losses in the qualifier,” said John Bowland, a NASA Ames employee and faithful fan of the Space Cookies since its start in 2006.

NASA is the largest sponsor of the national FIRST program, supporting five regional competitions and more than 280 teams.

To view the Silicon Valley Regional results and rankings, visit:


To view photos of the event, visit: http://go.nasa.gov/HhMPnh