The House of More Than a Decade of Tomorrows 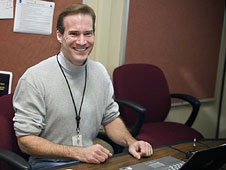 Pat Troutman leads a group of engineers in designing work facilities and exploration capabilities for astronauts on the moon and, eventually, Mars. But, he warns, "What I think they'll look like today is not what they're going to look like tomorrow. What we write down on the board really establishes the functions that they're going to have to do, but there are a thousand different answers to how you can do a specific function." Credit: NASA/Sean Smith

"I get so bored when things don't change within a week," says Troutman, laughing, which he does easily.

Embracing change is a requirement for his job: leading surface architecture integration for the Space Mission Analysis Branch. In that position, he oversees the creation process of the architecture that will be used when NASA goes back to the moon in 2020.

The work has generated models of what astronauts could live in on the moon, but Troutman quickly disabuses anyone's notion that any of those models will become the lunar home. "What I think they'll look like today is not what they're going to look like tomorrow," he says. "What we write down on the board really establishes the functions that they're going to have to do, but there are a thousand different answers to how you can do a specific function."

And then those answers can change with technological advances.

"What if, say, the automotive industry develops a fuel cell that's 10 times more efficient than what we've got?" Troutman asks. "Can I adapt that to the lunar surface, and how does that change how we build things?"

And answers can change with new partners.

"Let's say NASA might be the lead architect," he says, "but just like the space station, to be robust and sustainable, the more buy-in you have, the more players, the better off it is."

Answers can change with bosses.

"Whatever we come up with has to be palpable, doable, acceptable and affordable through multiple administrations," says Troutman, who has worked at NASA Langley Research Center for 23 years.

And answers can even change with destinations.

"There are a whole set of people out there who say we should be going to Mars first," he says. "Everything we've been working on up to now is perfectly applicable to Mars. There's no lost work there."

For now, though, the mission is to go back to the moon, which some critics argue is merely a repeat of Apollo and the 1960s. But it's so much more, and that more is what drives the architects. "Just to repeat Apollo is not enough," Troutman says. "We have to do more than that. We're going to go back, but this time we're going to stay around and explore."

The architects pick the brains of the Apollo-era engineers, and they listen to pronouncements of futurists who speak of cities on the moon, but their goal is something in between.

Troutman calls it establishing an "outpost."

"It's just a forward base to enhance exploration," he says. "It's a place that you can return to time and time again to facilitate your mission." 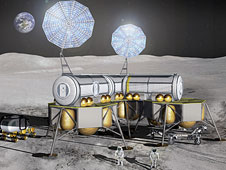 Living off the land on the lunar surface, artist's concept. Credit: NASA

In that mission, four people will land on the moon and stay for extended periods, exploring and -- just as important -- getting used to living away from Earth. While the International Space Station has provided some of that education, it's still only a two-day flight from Kennedy Space Center.

But the moon is four days each way, and Mars is a year going and nine months returning, with stays of up to 500 days in between.

"On all of these trips, whether it's to the moon or to Mars or to ... some other solar system, forget Mother Earth," Troutman says. "You can't call her up and have her deliver a pizza. You're on your own, and you have to live with what you bring with you."

Or, in this case, what you might send ahead.

"One of the things we bring with us every time we bring someone to the moon is a two- or three-story lander full of tanks, materials, residual hydrogen and oxygen and stuff," Troutman says. "That's the first thing we're going to do in in-situ resource utilization. We're going to scavenge the heck out of that thing."

The idea is to design the habitat with interchangeable parts. Each lander then becomes a supply house for the next lander, offering computers and avionics equipment, hydrogen and oxygen, parts and pieces.

"That way," says Troutman, "when something goes out in the habitat, I can go out to the junkyard, pull one out and replace it."

The idea is to have a place to stay for the astronauts set up before they get to the moon.

"The way we're structuring the architecture right now -- and remember, that's at this moment; 10 years from now it might not be like that -- is we're doing something called an integrated cargo pallet," Troutman says. "This pallet has power and communications that are designed to work on the moon. And we're designing it so that it works with any lunar outpost element."

The pallet is taken aloft by an Ares V rocket, and it's taken to the lunar surface by the lander.

"That's something they couldn't do with Apollo," Troutman says. "We have technology that (allows us to) push a button and go land on the moon at a certain spot. It took people to do that with Apollo."

Once the habitat is in place, the astronauts who are propelled aloft by Ares I can land on the moon. 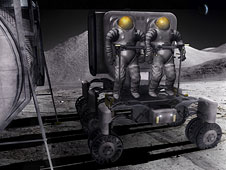 Getting around on the lunar surface, artist's concept. Credit: NASA

"When they get there, there's a habitat, there's power, there's hot and cold running water, there's a bathroom and stuff," says Troutman. "So all they have to bring is themselves. The Orion crew exploration vehicle and another lander act as an Earth-moon taxi. They take the four-day trip to the moon and they come down and hop out and just go live in this. … And we're not going to send any people to the moon or Mars until we know there's a fully functioning habitat waiting for them."

The living's not easy, but it is adequate.

"The Ares V is up to a 10-meter (cargo) shroud, which is 33 feet (in diameter)," Troutman says. "The back of my house is 60 or 70 feet, so it's half my house long. And you can get almost a two-story-high building in that thing. For four people, that's pretty good living."

It's also a different way of life for the four people than any of their space predecessors have lived. For one thing, they're going to have to be handy around the house, fixing things on the fly. Lessons from the International Space Station have showed them the way.

"One of the things we've learned from space station is that they've spent precious time fixing it," says Troutman, who worked on the station's design. "It's important to consider methods and techniques for repairing and sustaining it. Stuff breaks down, and we've learned a lot of lessons about sustainability and operability that we'll apply to the lunar surface."

In that, NASA's partners on the space station have an example.

"The Russians have a great philosophy," Troutman says. "When something goes wrong, they're generalists. They don't go back to Earth and say, 'come up with a procedure for fixing this.' They try to get it to work first, and that's what our lunar astronauts are going to have to do."

It's all so new, and yet it's not. Though many would believe that the notion of returning to the moon and then going on to Mars is three years old and began with President Bush's "Vision" speech on Jan. 14, 2004. But Troutman reminds that the "S" in NASA is an indicator that exploring space is never far out of the minds of the agency's scientists and engineers.

"(Werner) Von Braun's intent always was to continue on through the moon and to Mars and to spread human society all throughout the solar system and beyond," he says. "It never died after Apollo. It just goes into hibernation at various stages."

So the architects use the work of various study groups, that of Apollo and of missions since. And they try to understand what the future might -- or might not -- hold.