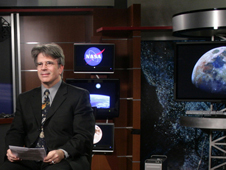 Question: What is the definition of a supermoon and why is it called that?

'Supermoon' is a situation when the moon is slightly closer to Earth in its orbit than on average, and this effect is most noticeable when it occurs at the same time as a full moon. So, the moon may seem bigger although the difference in its distance from Earth is only a few percent at such times.

It is called a supermoon because this is a very noticeable alignment that at first glance would seem to have an effect. The 'super' in supermoon is really just the appearance of being closer, but unless we were measuring the Earth-Moon distance by laser rangefinders (as we do to track the LRO [Lunar Reconnaissance Orbiter] spacecraft in low lunar orbit and to watch the Earth-Moon distance over years), there is really no difference. The supermoon really attests to the wonderful new wealth of data NASA's LRO mission has returned for the Moon, making several key science questions about our nearest neighbor all the more important.

Are there any adverse effects on Earth because of the close proximity of the moon?

The effects on Earth from a supermoon are minor, and according to the most detailed studies by terrestrial seismologists and volcanologists, the combination of the moon being at its closest to Earth in its orbit, and being in its 'full moon' configuration (relative to the Earth and sun), should not affect the internal energy balance of the Earth since there are lunar tides every day. The Earth has stored a tremendous amount of internal energy within its thin outer shell or crust, and the small differences in the tidal forces exerted by the moon (and sun) are not enough to fundamentally overcome the much larger forces within the planet due to convection (and other aspects of the internal energy balance that drives plate tectonics). Nonetheless, these supermoon times remind us of the effect of our 'Africa-sized' nearest neighbor on our lives, affecting ocean tides and contributing to many cultural aspects of our lives (as a visible aspect of how our planet is part of the solar system and space).