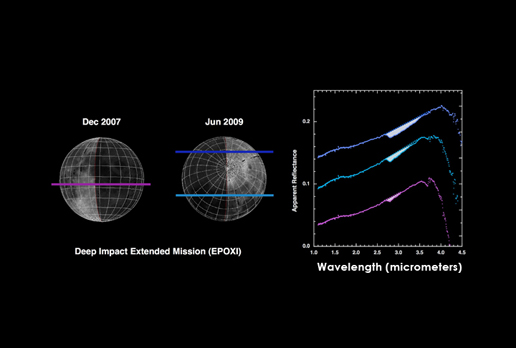 Since successfully carrying out its spectacular impact experiment at comet Tempel 1 on July 4, 2005, the Deep Impact spacecraft has been on an extended mission, called Epoxi, which culminates in a flyby of comet Hartley 2 on November 4, 2010. En route to the second comet, the spacecraft observed the moon for calibration purposes on several occasions. In June 2009, the northern polar regions were observed and detailed measurements of light from the regions, called spectra, were collected (blue and cyan). These data unambiguously show the signature of water and hydroxyl (hashed regions). The water signature varies in strength; in particular, data acquired over the warm equator in December 2007 have a distinct but weaker signature (purple).